The past week has been quiet in the markets, seeing a weakly risk-off environment dominate as markets anticipate several rate hikes from major central banks over the coming week.

The difference between success and failure in Forex / CFD trading is highly likely to depend mostly upon which assets you choose to trade each week and in which direction, and not on the exact methods you might use to determine trade entries and exits.

So, when starting the week, it is a good idea to look at the big picture of what is developing in the market as a whole, and how such developments and affected by macro fundamentals, technical factors, and market sentiment. There are some valid short-term trends in the market right now, which might be exploited profitably. Read on to get my weekly analysis below.

I wrote in my previous piece on 27th November that the best trade opportunities for the week were likely to be cautious short-term long trades in the GBP/USD. This was a good call as the GBP/USD currency pair rose by 1.91% over the next week.

The Bank of Canada raised rates by 0.50% to a total overnight rate of 4.25% last week, the joint-highest of any major central bank with the Reserve Bank of New Zealand.

The other most important market news last week was Australian GDP data coming in just a whisker below expectations at a quarterly increase of 0.6%, and slightly higher than expected US PPI data which showed a month-on-month increase of 0.3%, suggesting inflation in the US may not be falling as rapidly as hoped. There was also an indication of stronger than expected consumer demand in the US – despite rising interest rates, consumer demand has tended to remain strong over recent months.

Global stock markets ended the week mostly lower, as did most commodity markets, notably in crude oil. The Forex market saw most strength in the US Dollar last week. The weakest currency was the Canadian Dollar.

Rates of coronavirus infection worldwide rose for the fifth consecutive week. However, the raw numbers have not been this low since the end of the first wave in the summer of 2021. The most significant growths in new confirmed coronavirus cases overall right now are happening in Guatemala and Japan.

The coming week in the markets is likely to see a higher level of volatility, as there are several major central bank data releases scheduled, some of which might have a strong impact if there are any surprising elements. The scheduled releases are:

With the world’s two largest central banks making crucial reports, and several others also likely to announce rate hikes over the coming week, we are likely to see a considerably more active market compared to last week. US inflation data is especially pertinent as it is currently the biggest driver in capital markets worldwide.

The weekly price chart below shows the U.S. Dollar Index printed a bearish inside candlestick which showed a very small rise over the week. However, the former support level at 102.94 has acted as resistance. The chart is showing bearish price action without question.

The long-term bullish trend in the US Dollar is over technically, as we see the current price making 3-month lows, with 6-month lows also in sight.

Short-term direction in the US Dollar looks likely to bearish due to the resistance level at 104.92, and the bearish price action, especially if the price breaks down over the coming week to new long-term lows seen a couple of weeks ago. Therefore, it may be wise to only enter trades which are short of the US Dollar. However, keep in mind there are major central bank releases due this week which could cause volatility, especially if there are any surprises. 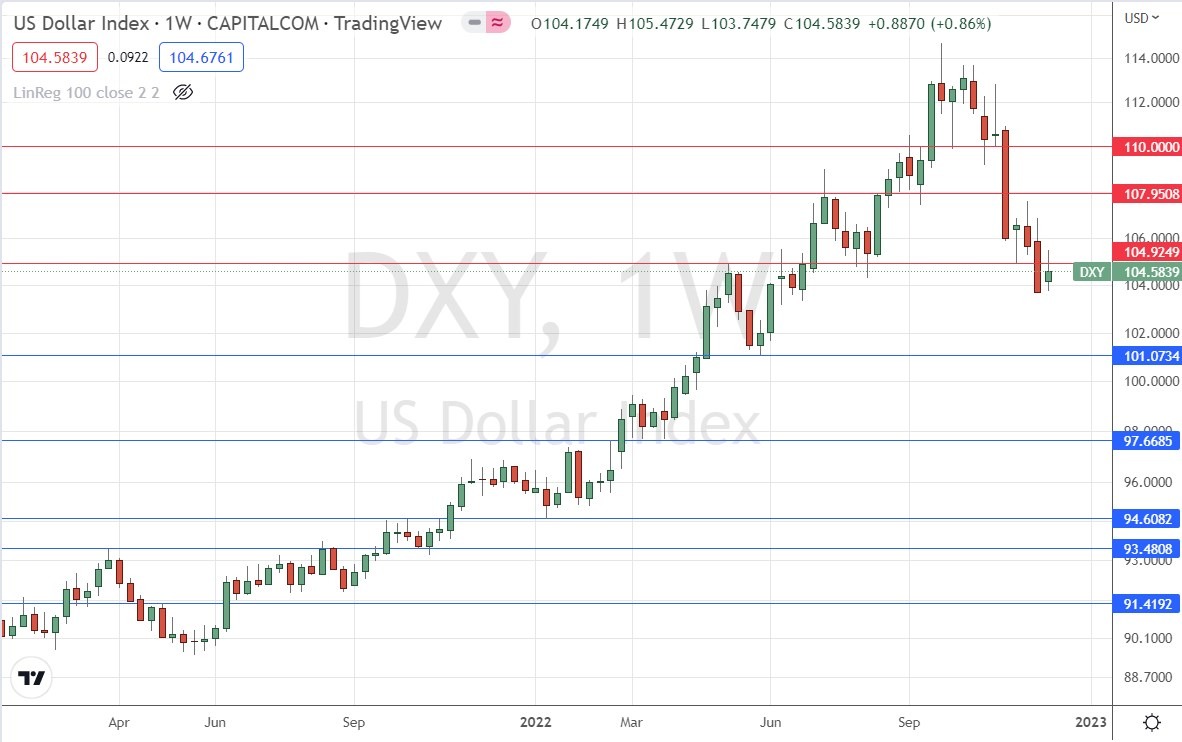 Last week saw Silver print a bullish hammer candlestick which closed above the previous week’s high, making the highest price seen since April this year. There is…

BOE and ECB the main highlight of the agenda today

Gold Treads Water Ahead of a Cascade of Central Bank Hikes. Where…

Season-Best Gives No. 2 Florida Win versus No. 17 Georgia