As Bitcoin miners close up shop, one metric suggests that the market bottom may


Editor’s Note: With so much market volatility, stay on top of daily news! Get caught up in minutes with our speedy summary of today’s must-read news and expert opinions. Sign up here!

(Kitco News) – It’s been a difficult year for Bitcoin miners as the strength of the Bitcoin network achieved a new record high hashrate and difficulty reading amid a 75% decline in the price of BTC from its all-time high set in November 2021.

The rising hashrate juxtaposed with the falling price of Bitcoin means that profitability is on the decline while the level of competition in the mining industry has never been higher. As a result, miners have had to sell their earnings at the fastest rate since early 2021, when the bull market was just getting started. 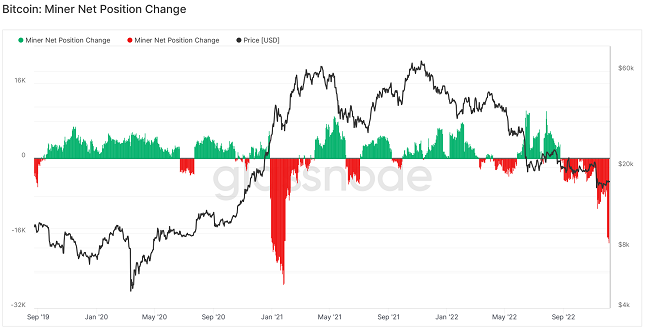 With Bitcoin continuing to struggle to gain momentum, trading near support at $17,000 at the time of writing, less profitable miners have increasingly had to turn off their machines in an effort to save money.

Rising energy costs across the U.S. and Europe have further exacerbated the situation and forced previously profitable operations to close up shop.

As a result of mining rigs being powered down, Bitcoin mining difficulty saw its largest downward adjustment in over a year, with a 7.32% decrease occurring on Tuesday at block height 766,080. This coincided with a drop in the average hashrate from 264.18 EH/s to 245.10 EH/s, according to data from BTC.com.

The difficulty adjustment is an automatic feature coded into Bitcoin that alters how hard it is to mine a block depending on changes in hashrate, which helps the network maintain its 10-minute block time. Difficulty adjustments occur every two weeks, which means that miners will have an easier go through the middle of December after dealing with record-high difficulty through much of 2022.

To go along with a decrease in difficulty, resilient miners who’ve managed to survive the depths of crypto winter thus far are starting to benefit from less profitable miners dropping out. Data from Glassnode shows that as some miners powered down their rigs, the profitability for remaining operations has begun to climb higher. 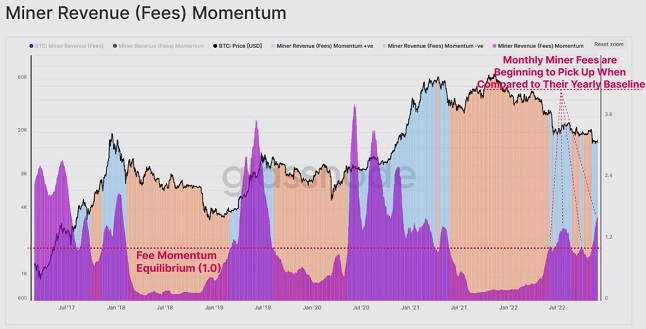 Since Bitcoin difficulty is a lagging indicator, with downward adjustments coming after a decline in hashrate, it’s possible to see the effect of a decrease in miners reflected in an increase in profitability for those that remain.

According to Glassnode, “Sustained bear markets are often accompanied by a significant decline in network activity, resulting in fairly lackluster fee revenue. This deadlock has historically broken in reaction to a major capitulation in price action, where substantially lower prices entices new demand for blockspace.”

The uptick in fees suggests that the decrease in Bitcoin price has prompted more activity on the network, which has led to more demand for blockspace and “an uptick in network congestion.” This will come as a welcome sight to struggling miners who risk going out of business.

It also hints at the possibility that the market bottom may be in as Bitcoin’s recent capitulation to a multi-year low of $15,599 has prompted an increase in activity on the network and demand for blockspace, which has historically been followed by an increase in price, as shown on the Miner revenue momentum chart above.

Only time will tell if this is the actual bottom, but the increase in miner revenue is cause for hope. As Glassnode noted, “Of most interest is whether this uptick is fleeting, or whether it can be sustained, signifying a potential regime shift is underway.”

In related news that could impact the larger Bitcoin mining ecosystem, Cryptonews has reported that lawmakers in Russia are inching closer to legalizing crypto mining in the country, and could potentially allow industrial miners to operate as “entrepreneurs” in January 2023. And in Paraguay, government officials have voted down a bill that would have capped electricity rates for crypto mining operations, according to a report from The Block.

Read More: As Bitcoin miners close up shop, one metric suggests that the market bottom may