Two Palestinian terror group fighters were killed in heavy clashes with Israeli troops that broke out during a pre-dawn arrest raid near the northern West Bank’s Jenin refugee camp.

The Israel Defense Forces said special forces from the Haruv and Duvedan units entered the adjacent town of Wadi Burqin to arrest three Palestinians suspected of involvement in terror activity.

The military said troops came under heavy fire during the operation and responded with gunshots of their own, adding that “hits were identified.”

The casualties were identified as Mohammed Ayman Saadi from Palestinian Islamic Jihad (PIJ) and Na’im Zubeidi from the Fatah-linked al-Aqsa Martyrs Brigades, though the various armed factions are known to work together in Jenin against the IDF.

The IDF and Shin Bet security agency said in a joint statement that the pair were senior terror operatives. Both of the killed gunmen were in their 20s but had already served time in Israeli jails for security offenses.

Saadi was a “prominent PIJ military operative” responsible for a series of shooting attacks against troops, and arming other operatives, under the directions of the PIJ leadership, the statement said.

The statement said Zubeidi was also responsible for numerous shootings at Israeli forces in the West Bank. Palestinian media said Zubeidi was a relative of Zakaria Zubeidi, a notorious Al-Aqsa Martyrs Brigades terrorist who masterminded terror attacks during the Second Intifada and managed to briefly escape from Israeli prison last year.

Prime Minister Yair Lapid hailed the operation, saying the pair had planned and carried out terror attacks in Israel.

“The activity of the IDF and the security forces tonight in Jenin is a direct continuation of our uncompromising policy in the fight against terrorism. The two senior [terroritsts] who were killed, an Islamic Jihad field commander in Jenin, and a senior member of the al-Aqsa Brigades in Jenin, planned and carried out terror attacks in Israeli territory,” Lapid said on Twitter.

“Precisely in these stormy days, when irresponsible parties are trying to drag the IDF into an extreme debate and incite soldiers against their commanders, I want to express my appreciation to the security forces,” he said, referring to right-wing lawmakers’ criticism of punishment for a soldier who taunted an activist in Hebron last week.

Palestinian media reported that as many as 20 people were wounded at varying degrees, and the hospital in Jenin declared a state of emergency, urging locals to come and donate blood.

The IDF said no soldiers were hurt in the operation. 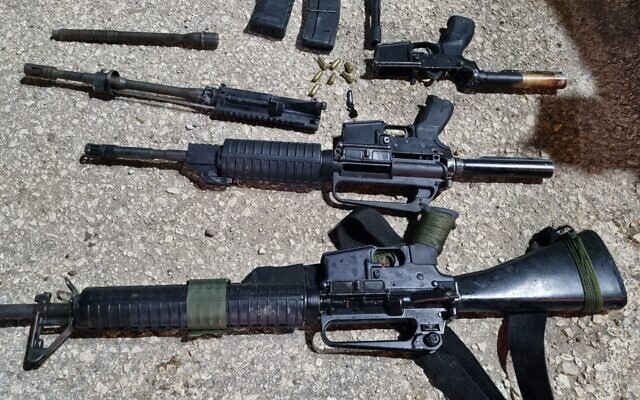 Weapons seized by Israeli troops after a raid in the West Bank town of Wadi Burqin, near Jenin, December 1, 2022. (Israel Defense Forces).

In a statement early Thursday, an Islamic Jihad spokesman vowed to extract a price against Israel for the “heinous crime.”

Over the past year, the Gaza Strip-based PIJ has launched rockets at Israel in response to members being killed or arrested in the West Bank.

Hundreds of Jenin residents were filmed taking part in a funeral procession for one of the killed fighters that departed from the city’s hospital.

The Jenin refugee camp and the surrounding area have been identified as a terror hotbed by the IDF, which says it has been forced to operate widely in the town that is in Palestinian Authority-controlled Area A of the West Bank since the PA has lost control in…

Ukraine Carries Out Anticorruption Raids Ahead of Visit From EU:…

Iranian couple filmed dancing in Tehran are jailed for 10 years |…

Was Israel behind drone attack on Iran military installation? |…

Russia claims 14 killed in attack on hospital in eastern Ukraine…