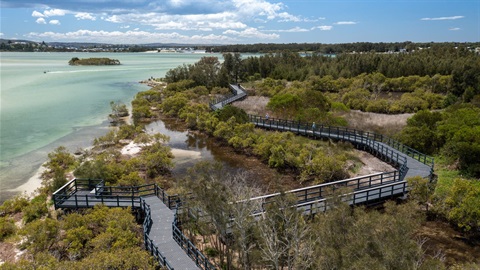 A new lakeside boardwalk on Pirrita Island will showcase the unique landscape and heritage of Swansea foreshore.

Lake Macquarie Deputy Mayor Adam Shultz was joined by Member for Swansea Yasmin Catley MP on Pirrita Island today to officially open the new boardwalk, which was constructed thanks to $3 million in funding from the NSW Public Spaces Legacy Program.

Cr Shultz said the accessible boardwalk, which spans 230 metres and winds through mangroves, would be a major drawcard for residents and visitors alike.

“Pirrita Island has been a popular recreation spot for many years, with activities largely focused around the reserve at the southern end of the island, which offers picnic and barbecue facilities and panoramic views of Swansea Channel,” Cr Shultz said.

“The new boardwalk invites visitors to explore the area around Miners Point, on the island’s north-western edge, and boasts uninterrupted views across Lake Macquarie – the stunning jewel of our city.”

Ms Catley said Pirrita Island was an iconic location at Swansea that the community flocks to in the summer months.

“The new boardwalk makes the location more accessible than ever and allows even greater exploration of the area,” Ms Catley said.

“I have had the chance to check out the new boardwalk and can attest that the views are fantastic.

“The new boardwalk is another example of the state and local levels of government working together to deliver new infrastructure for our community.”

‘Pirrita’ is the Awabakal word for oysters from the mangroves, while Miners Point references the coal mining families who lived on the island throughout the 1900s.

Interpretive signage will be installed along the boardwalk, showcasing the heritage of the area, as well as the unique flora and fauna that call the island home.

The boardwalk is part of a suite of improvements Council is undertaking along the foreshore at Swansea.

As well as stabilising the foreshore, the existing car park on the western side of Pirrita Island has been upgraded to improve access. A new outdoor fitness trail has also been installed along Channel Street between Swansea Swim Centre and Thomas Humphreys Reserve.

/Public Release. This material from the originating organization/author(s) may be of a point-in-time nature, edited for clarity, style and length. The views and opinions expressed are those of the author(s).View in full here.

Eskom ramps up rolling blackouts to Stage 4 until further notice…

Will somebody please vote for me?

“Dem Dey Teach Wizkid How to Spend Him Money That Year”: Bovi…

A Wonderful “Dirty” Rock… Here’s Why There Will be Increased…

Yellen says Africa to shape world economy as US reengages

Three busted for meth in Coal Grove – The Tribune

The AP Interview: Pope Francis: ‘Homosexuality not a…