Israel’s high-level security cabinet was set to convene Thursday to discuss the terms of the US-proposed deal for a maritime border with Lebanon.

Lebanon on Tuesday sent Washington its remarks on the proposal. No official details were provided on the contents of the Lebanese position.

Deputy parliament speaker Elias Bou Saab said the issue was “now in the hands of the US mediator,” adding that the response included “modifications” to the US proposal.”

It is not clear that any such modifications will be well received in Israel.

A Western diplomat has pushed back against the notion that Lebanon’s leaders had raised any serious objections to the terms of the proposal, according to a new report.

The unidentified diplomat told Walla news Wednesday that “Lebanon’s comments on the draft deal are constructive and do not include ‘poison pills’ that could prevent an agreement.”

The official said reports in Lebanese media that authorities in the country had reservations about key points in the proposal are untrue.

Citing unnamed government officials Tuesday, the pro-Hezbollah daily Al-Akhbar reported that Beirut did not agree to recognize Israel’s buoy-marked boundary — which Jerusalem unilaterally placed five kilometers off of the coast of the northern town of Rosh Hanikra in 2000 — as an international border. 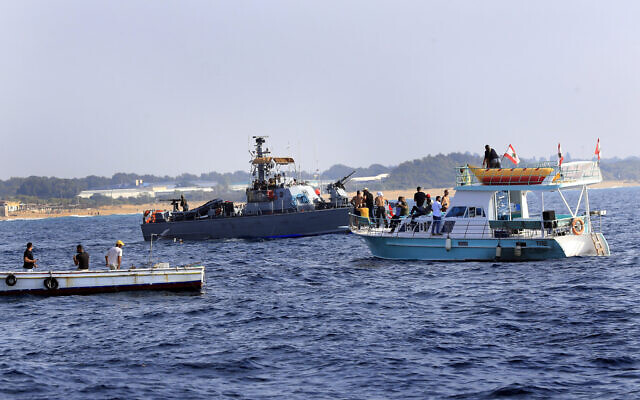 The report claimed Beirut was also against the idea of demarcating a land border as part of the agreement, and insisted that the issue must instead be reserved for discussions with the United Nations.

Furthermore, it said Beirut wants the French Total Energy company to work with Lebanon independently from its work with Israel, likely taking issue with the reported compensation Israel will receive from energy companies in exchange for giving up rights to the Qana offshore gas field.

Finally, Lebanon reportedly objects to a proposed signing ceremony alongside Israeli officials in the Lebanese city of Naqoura. Instead, officials countered that a deal should be signed with officials from the two sides in separate rooms, since Israel and Lebanon do not have any diplomatic relations and are technically at war.

Over the weekend, the Biden administration’s energy envoy Amos Hochstein presented what is believed to be a final proposal aimed at addressing competing claims over offshore gas fields in the Mediterranean Sea — which initially seemed to be welcomed by both sides.

In response to the Lebanese reports, a senior official close to Prime Minister Yair Lapid told reporters Tuesday that the government was awaiting the official Lebanon response to the latest outline before deciding how to react.

“Lapid will not compromise on the security and economic interests of Israel,” the official added. 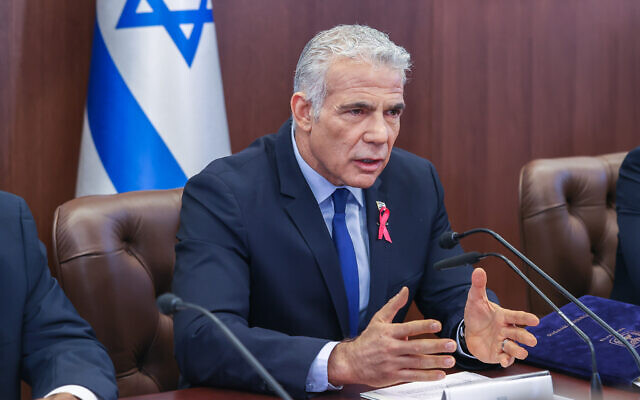 Although full details of the agreement have not been made public, diplomats familiar with the matter say that the proposal recognizes Israel’s buoy-marked border, and after that, the border will follow the southern edge of the disputed area known as Line 23.

The deal is said to allow Lebanon to enjoy the economic benefits of the area north of Line 23, including the Qana gas field, while Israel will remain in control of the Karish gas field.

The deal has come under fire from opposition leader Benjamin Netanyahu, who labeled the agreement “illegal” and accused Lapid on Monday of giving up “sovereign territory of Israel,” vowing that a potential future coalition led by him “won’t be bound by it.”

Earlier Monday, Lapid charged that the former prime minister was discussing the matter “without seeing the deal and without knowing what’s in it.”

He also accused Netanyahu of taking out his frustrations “on not reaching a deal during his 10 years in office” by parroting propaganda from Hezbollah chief Hassan Nasrallah.

Last month, Lapid’s office vowed Israel would go ahead and extract gas from Karish with or without any final deal on the maritime border dispute.

Jacob Magid contributed to this report.

I’m proud to cover Israeli arts and culture for The…

Climate Crisis and How It Affects Uganda’s Economy [opinion] – InsuranceNewsNet