With Travel Demand Picking Up, Is It Time to Buy This Airline Stock Now?


Southwest Airlines (LUV -2.19%) released an investor update last week, citing strong leisure travel demand and signs that business travel might be ramping up. The stock is trading more than 45% off its highs from last year, but the company just broke its quarterly profit record in the second quarter of this year.

So is it time to buy the dip on this airline stock? Let’s take a closer look at Southwest and the company’s current trajectory.

Southwest is the largest low-cost carrier by fleet size in the world. Operating 726 aircraft, the company also claims the fourth-largest fleet in the world, behind American Airlines, Delta Air Lines, and United Airlines.

Demand for air travel picked up significantly this summer, and Southwest noted a “surge in leisure demand, especially in June.” As a result of robust bookings and fuller flights, the company set a new all-time high for quarterly profit in Q2.

On a positive note for the entire airline industry, last month the San Diego International Airport announced that it served more than 2 million passengers in June — for the first time since 2019. This represents a roughly 83% recovery from pre-pandemic levels. 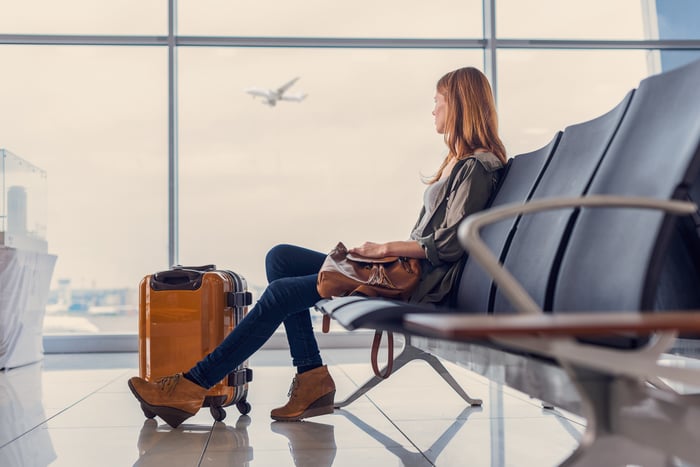 While awaiting a full recovery, Southwest continues to invest in its own growth, opening a $100 million aircraft maintenance facility in Denver earlier this year. The addition of the 130,000-square-foot Denver maintenance hangar marks the seventh facility of its kind for Southwest, and is expected to markedly improve operations in one of its busiest airports.

Business travel has been slow

Southwest now expects its third-quarter business revenue to be down even more than initially expected. The company’s previous estimate was 17% to 21% below Q3 2019 levels, and that estimate has since dropped into the 26% to 28% range.

Leisure demand is better than expected

Despite less-than-desirable business demand, Southwest made up for slower business bookings with greater-than-expected leisure bookings, observing strong demand through the Labor Day holiday. And leisure revenue continues to exceed expectations in the third quarter.

After setting record quarterly profits in Q2, the company expects “solid profits” to continue for the remainder of the year. Though still too early to tell, Southwest anticipates its current leisure boom to carry into the fourth quarter as well. With a clearer picture of how the year will close out, the company provided a revised annual guidance of 9% to 11% growth from 2019 levels (previously estimated at 8% to 12%).

Southwest also noted that corporate travel has shown recent signs of improvement, with business revenue trends improving 8% to 10% from August to September so far. Delta observed a similar increase in business travel as well, citing a spike in post-Labor Day business bookings.

As we saw from the recovery in leisure travel, demand can ramp up quickly. While leisure travel has been healthy, if Southwest can earn back some of its pre-pandemic business travel revenue, this airline stock could make a nice comeback in the near future.


Read More: With Travel Demand Picking Up, Is It Time to Buy This Airline Stock Now?

We’re Drawing the Wrong Lesson From the Third Energy Crisis

Analysts have given Pioneer Natural Resources (NYSE:PXD) an…