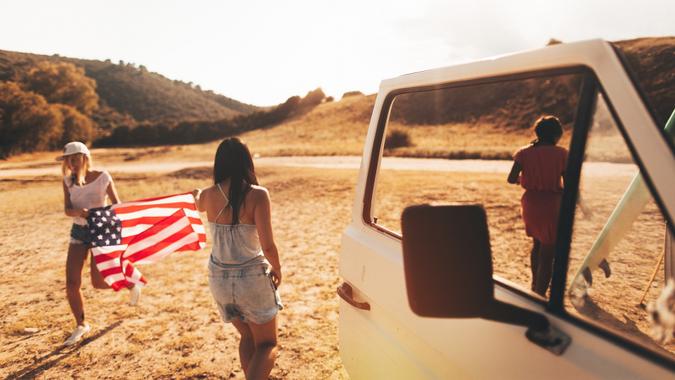 If you plan on hitting the road this July 4 weekend, expect to see plenty of traffic — and the highest gas prices the holiday has ever seen.

See: Stimulus Updates To Know for Summer 2022
Find: 8 Remote Jobs That Pay at Least $20 Per Hour

AAA estimates that 42 million Americans will take a road trip of 50 miles or more this July 4, CNN reported. If that happens, it will set a new record for people (and cars) on the road.

Gas prices are also expected to set a new July 4 record of around $4.75 a gallon, Forbes reported, citing a recent prediction from Patrick De Haan, GasBuddy’s head of petroleum analysis. That price would represent an increase of more than 50% from July 4, 2021, when the national average was $3.13 a gallon.

Best Savings Accounts: Choose a high-interest savings account from our top banks with rates at 5X to 10X the national average and start saving today.

The good news (sort of): This year’s estimated July 4 price actually reflects falling prices at the pump, as the national average soared above $5 a gallon in early June.

Of course, it’s hard to look at $4.75-a-gallon gas as cheap. If you plan on motoring over the July 4 weekend, there are ways to reduce your gasoline bill. The easiest (and cheapest) option is to consider a “nearcation” that involves visiting a place not too far from where you live. Driving 30 miles instead of 300 can carve hundreds of dollars off your fuel bill.

Another trick is to avoid fueling up at gas stations located just off of major highways.

Even if you must stop at an expensive gas station because you’re running low on fuel, don’t fill up all the way. Pump just enough gas to carry you to a location where stations are cheaper.

You can scout out the cheapest gas prices in your area by using navigation apps that show gas prices, including Google Maps, Waze, and AAA’s TripTik Travel Planner. If you don’t need the map feature, gas-specific apps from GasBuddy, Gas Guru and Fuelio can also give you information on prices.

Another way to save money is to join a warehouse or membership club, where you might save anywhere from 5 cents to 25 cents a gallon, MarketWatch reported, citing comments from Consumer Reports. With gas prices so high, you can quickly offset the cost of a warehouse club membership by filling your tank a few times.

Live Updates: Financial Trends, Money News and More
POLL: Do You Have a Side Gig or Other Hustle?

If your credit card offers cash back or gas rewards, using it to pay for gas can also help you save money at the pump. For example, MarketWatch noted that the Citi Custom Cash Card gives users 5% cash back on up to $500 spent — and 1% after that — in its highest eligible spending categories, which includes gas stations.

Vance Cariaga is a London-based writer, editor and journalist who previously held staff positions at Investor’s Business Daily, The Charlotte Business Journal and The Charlotte Observer. His work also appeared in Charlotte Magazine, Street & Smith’s Sports Business Journal and Business North Carolina magazine. He holds a B.A. in English from Appalachian State University and studied journalism at the University of South Carolina. His reporting earned awards from the North Carolina Press Association, the Green Eyeshade Awards and AlterNet. In addition to journalism, he has worked in banking, accounting and restaurant management. A native of North Carolina who also writes fiction, Vance’s short story, “Saint Christopher,” placed second in the 2019 Writer’s Digest Short Short Story Competition. Two of his short stories appear in With One Eye on the Cows, an anthology published by Ad Hoc Fiction in 2019. His debut novel, Voodoo Hideaway, was published in 2021 by Atmosphere Press.