Equity markets have entered a bear market over the last three months as the Federal Reserve (Fed) has raised the fed funds rate to slow the pace of inflation, in our view. Thus far the Fed’s efforts have not slowed inflation but have altered our three tactical rules of ‘Don’t Fight the Fed’, ‘Don’t Fight the Trend’, and ‘Beware of the Crowd at Extremes’. Currently, we believe our three rules are sending a defensive signal as both the Fed and Trend have turned against investors.

Don’t Fight the Fed: Not on Investors’ Side, In Our View

At the start of 2022, the Fed Funds target range was zero to 0.25%. Since then, the Fed has raised the Fed Funds Rate by 1.50% in increments of 0.25%, 0.50%, and most recently 0.75% on June 15th. The pace of the interest rate hikes has increased due to the unrelenting pressure of inflation. Headline inflation as measured by the Consumer Price Index (CPI), currently stands at a forty-year high of 8.60%, and the Fed has vowed to control rising prices with rate hikes. With four remaining Fed Open Market Committee (FOMC) meetings left in the year, financial markets are expecting an additional 2.00% -2.50% worth of rate increases. We believe the impact of the potential interest rate increases will serve as a considerable headwind for financial markets the remainder of the year; we anticipate higher interest rates should slow the components of GDP: consumption, inventory growth, trade, and government spending.

The Fed’s inflation fighting agenda is in sharp contrast to the stimulative agenda of the past thirteen years since the Financial Crisis of 2008. In addition to raising rates, the Fed is also employing Quantitative Tightening (QT) as it works to drain excess cash out of the financial system. It is doing this by reducing its roughly $8.9 trillion balance sheet by allowing Treasuries and Mortgage-Backed Securities (MBS) to mature. Hence, the Fed is no longer on the investor’s side, in our view.

Internationally, the central bank message is more mixed, as the Bank of England (BOE), the European Central Bank (ECB), and the Bank of Japan (BoJ) all are at varying stages of dealing with inflation.

Both the BOE and ECB have committed to fighting inflation by raising rates at varying speeds, whereas the BoJ continues to purchase bonds by holding ten-year yields at 0.25%. In aggregate, the combined central bank balance sheet size is starting to shrink (see chart, above) …thus we conclude that global central bankers are, in aggregate, no longer on the investors’ side. 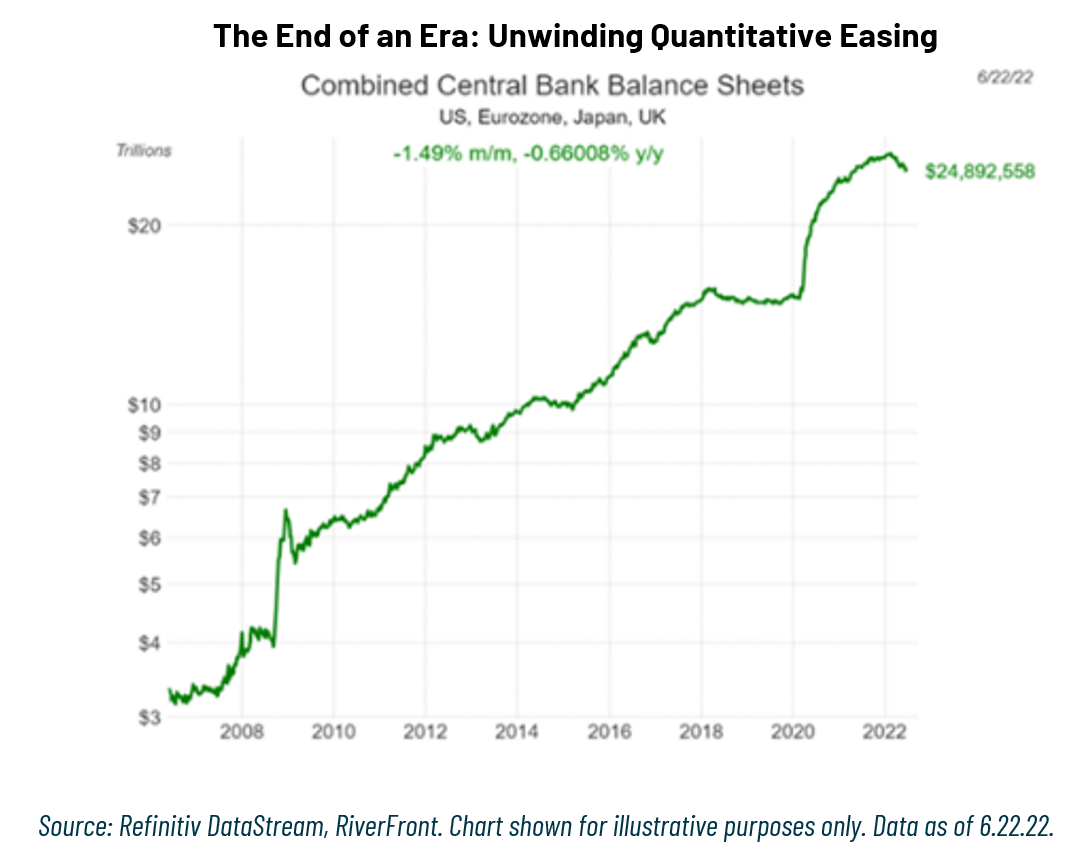 Don’t Fight the Trend: No Longer the Investor’s Friend, In Our View

The S&P 500 has entered bear market territory after experiencing an 18.5% pullback year to date. The relentless downward pressure on stocks has the trend, as defined by the 200-day moving average, falling at a negative 13% to 14% annualized rate. From current levels, the S&P 500 must rise to 4500 and stay there for 18 days for the trend to turn positive. Given the magnitude that the US market will have to shift for the trend to turn positive, we believe that the trend will remain a headwind for the foreseeable future and is not the investor’s friend. 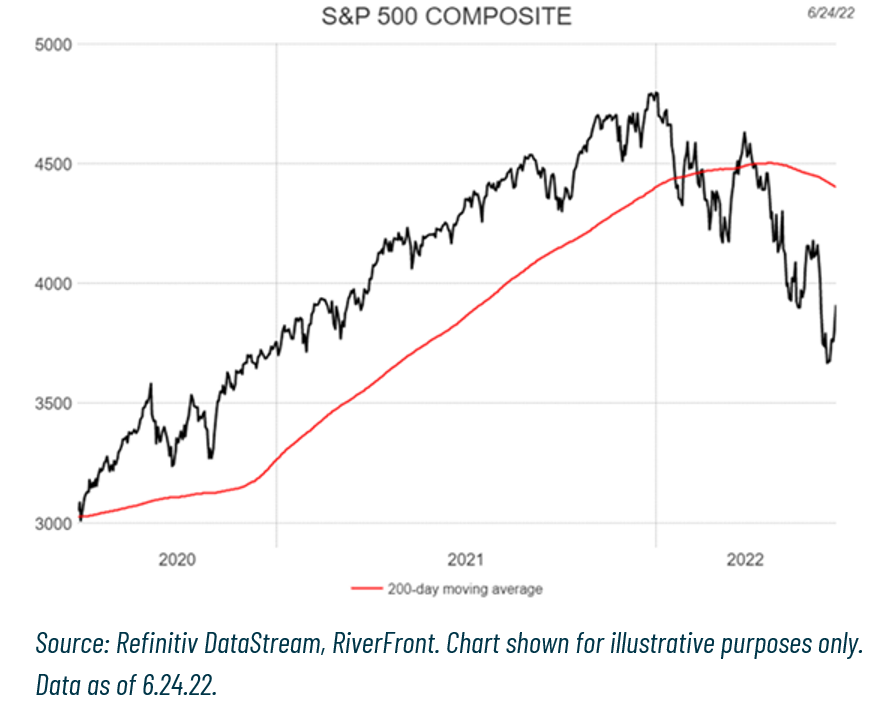 We come to the same conclusion on international stocks, as the MSCI All-Country World ex US trend is falling at a negative 18% to 19% annualized rate. Both markets are dealing with the impact of inflation and will struggle to find solid footing as central banks continue to be less accommodative, putting further pressure on stock valuations, in our view. 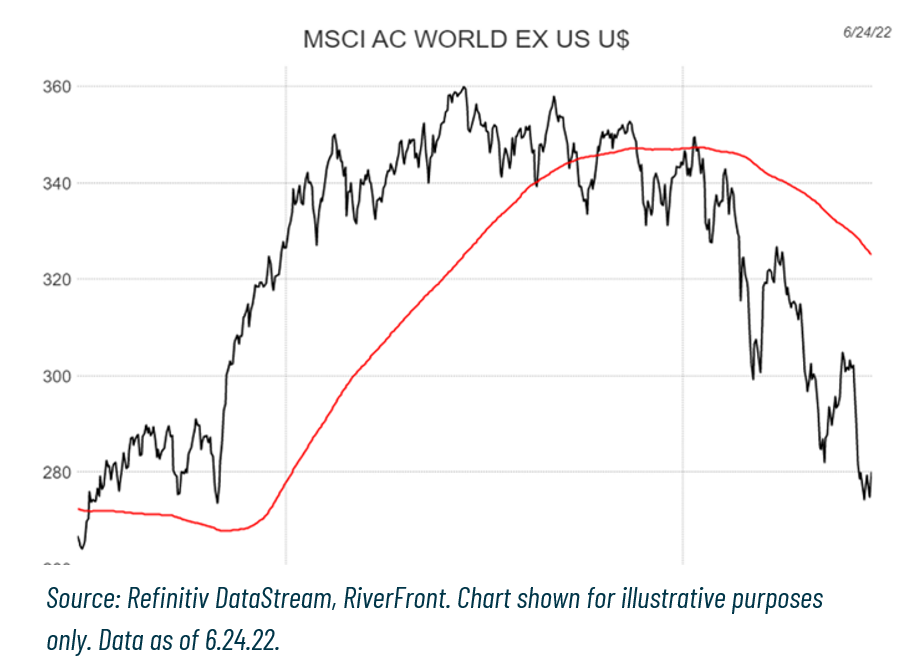 Beware of the Crowd at Extremes: We Believe Pessimism brings hope in Isolation

Since the beginning of the year, the Crowd has transitioned from the extreme optimism that was sparked by monetary and fiscal stimulus to extreme pessimism. The extreme pessimism of the Crowd is being driven by the Fed ending an era of ‘free money.’ Inflation is at a 40-year high, interest rates are rising with the 10-year Treasury yielding 3.13% as of June 24, 2022, up from around 1.51% as of the beginning of the year, and dwindling consumer savings relative to the peak of the pandemic. The extreme pessimism of the Crowd could be viewed as signaling a green light for equities. However, we have observed that durable market bottoms have typically occurred at more extreme levels of pessimism than what we’re currently observing on the NDR Weekly Crowd Sentiment Poll (see bottom panel of chart, above).

Last week, we saw a relief rally in US stocks due in part to sentiment being washed out. In our opinion, it appears like this is a bear market rally rather than a meaningful bottom. While stocks tend to have better returns when sentiment reaches extremely low levels, we cannot look at crowd sentiment in isolation. Looking…