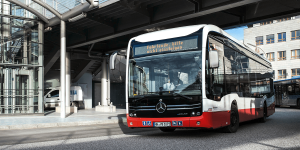 The Federal Ministry of Transport is funding the procurement of 472 additional electric buses including charging infrastructure for Hamburg with almost 160 million euros. Funding decisions have been handed over to Hamburger Hochbahn and Verkehrsbetriebe Hamburg-Holstein (VHH). More will be handed over in the next few days.

According to the ministry, the subsidy notifications for the Hamburg companies are the first within the framework of the guideline for the promotion of alternative drives in buses for passenger transport, which we have already reported on. Further funding notifications are to be handed over at the Electromobility Conference of the Federal Ministry of Digital Affairs and Transport (BMDV) on 7 and 8 April 2022 in Berlin.

The public transport operator Hamburger Hochbahn will receive around 97 million euros for the procurement of 289 electric buses and 486 charging infrastructure units. Hochbahn has set itself the goal of converting its entire bus fleet to alternative drives by 2030 – currently there are around 1,000 vehicles.

With reporting by Domenico Sciurti, Germany.

Funds to be raised for Spina Bifida | KNIA KRLS Radio

Analysts on inflation-beating funds to protect your money as…