It’s been another volatile week for the precious metals sector, with the price of silver (SLV) plunging more than 5% from last week’s close to a low of $24.00/oz. However, while the volatility may be unnerving some investors, the long-term outlook remains strong, supported by an improving technical picture, negative real rates, and increased demand for silver globally. Hence, I would expect sharp pullbacks in the metal to continue to provide buying opportunities.

Let’s take a closer look below: 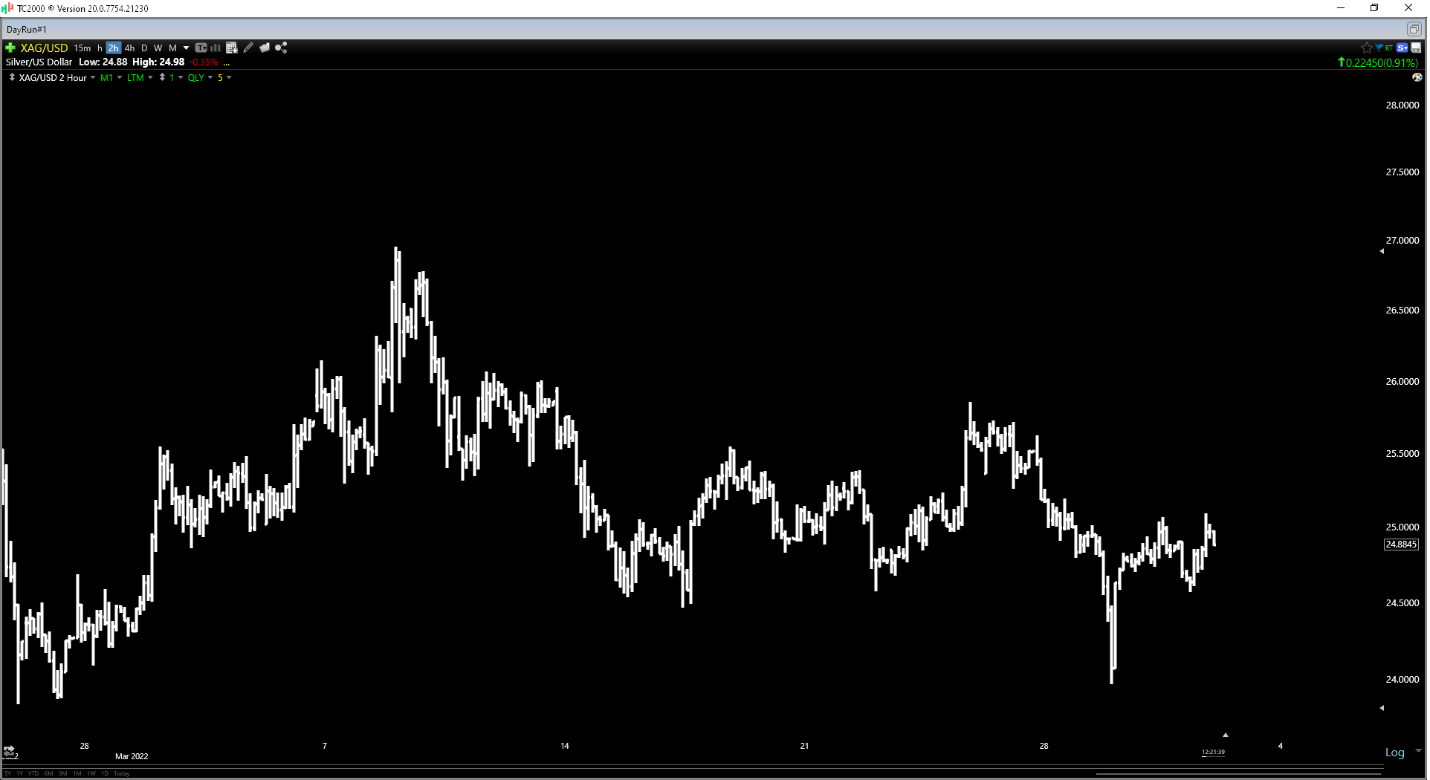 Beginning with the position of real rates, we can see that real rates remain deep in negative territory currently and fell to a new multi-year low after the February inflation reading (7.9%). While real rates did see minor mean reversion after the Federal Reserve hiked rates and committed to several more rates hikes, it is quite clear from this chart that real rates are a long way from heading back to positive territory. In fact, even with multiple rate hikes, I would still expect to see real rates remain at (-) 5% or lower vs. (-) 7.3% currently.

(Source: 3-Month Treasury Bill Rate Minus 12-Month Rate of Change In US CPI)

The current position of negative real rates favors owning assets to protect oneself from inflation. With the S&P-500 sporting a dividend yield of just ~1.3%, there is minimal opportunity cost to holding precious metals vs. stocks. I would expect this to support continued investment in precious metals, and it’s worth noting that in periods of similar inflation readings, the PE ratio for the S&P-500 was much lower, suggesting limited expected upside from capital appreciation, at least from a valuation standpoint. To summarize, given where inflation sits and the fact that inflation should remain elevated due to several factors, the case for owning precious metals has rarely been better.

If we look at silver specifically, we can see that silver mine production peaked in 2015/2016 and has been on a sharp decline since to roughly ~700MM ounces per annum. At the same time, automotive demand for silver is increasing rapidly, as is demand from the solar industry. This is because silver is the best conductor of electricity and has the highest light reflectance. This combination of increasing demand and declining production should translate to higher prices, making a case for owning silver or miners that produce the metal, with the latter likely to benefit from higher margins.

Although these fundamental points are important, a strong fundamental outlook is less meaningful unless the technical picture agrees with the fundamentals. In silver’s case, the metal has rarely ever looked better from a technical standpoint. This is because it continues to trade in a base-on-base pattern after breaking out to multi-year highs in mid-2020. Base-on-base patterns of this size are quite rare, and they often see a continuation to the upside. 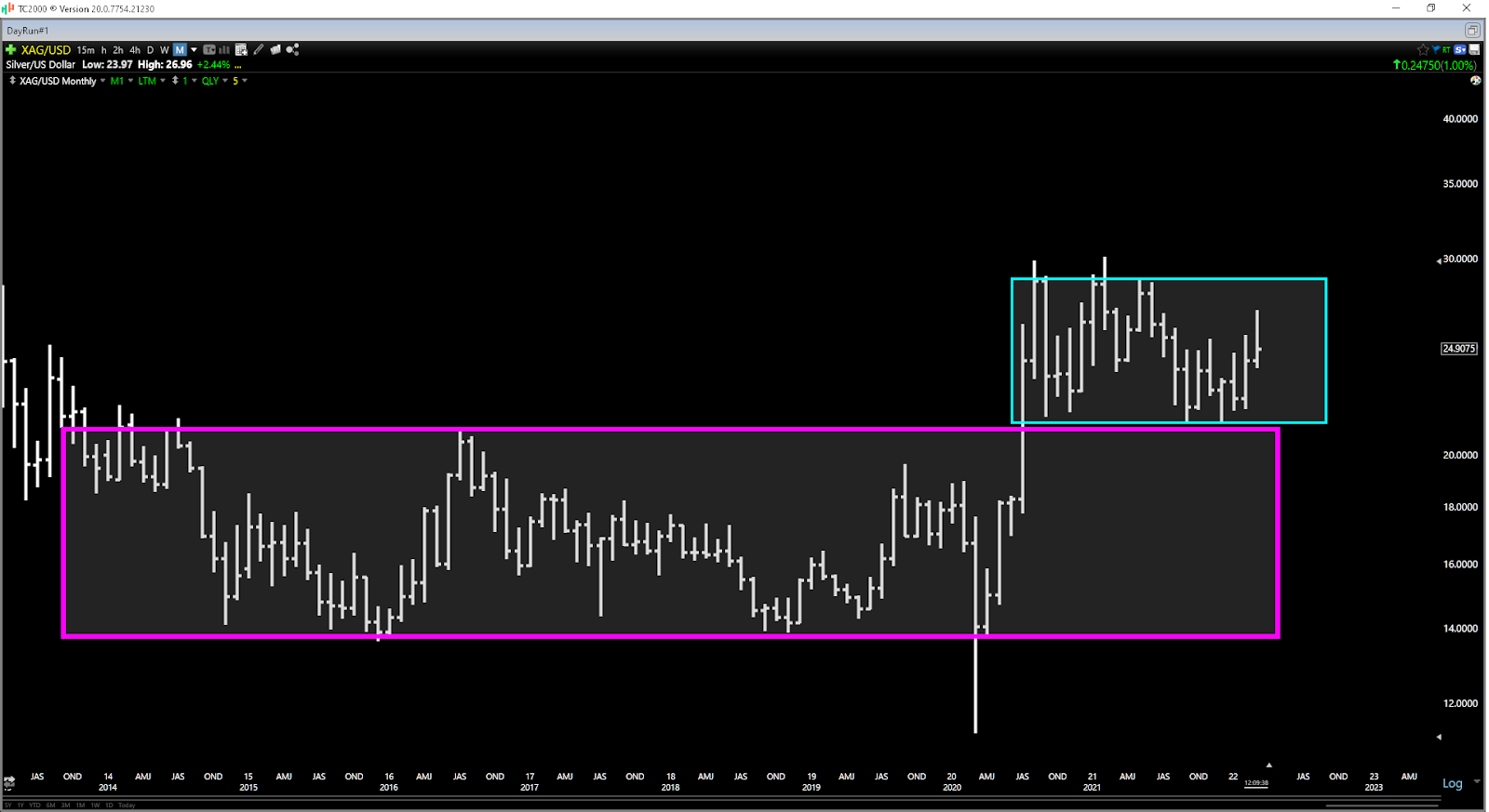 This time could be different from other multi-year base-on-base patterns, but generally, assets with this technical picture post strong medium to long-term returns. The good news is that silver continues to find strong support at $21.50/oz (its prior resistance level) and is beginning to make higher lows over the past few months, pointing to accumulation. Given this pattern, I would view any pullbacks into the lower one-third of this current consolidation pattern as buying opportunities. This would translate to corrections to $23.50/oz or lower.

Another way to play the silver price is through silver producers, and one name that stands out among the pack is GoGold Resources (GLGDF). While GoGold’s name suggests that it’s a gold company, the company is a silver producer in Mexico with a relatively small mine. However, the company is using cash flow from that mine to explore and develop the well-endowed Los Ricos District, where the company looks like it will define more than 360MM silver-equivalent ounces by 2024. This would give GoGold one of the largest resource bases in Mexico and likely make it a takeover target for producers looking to grow their footprint in the region.

The most attractive part about GoGold is that the company has seen limited share dilution relative to its explorer/developer peers, given that it’s able to fund much of its exploration expenditures with cash flow from its Parral Mine. Meanwhile, it has a very solid track record, with these companies trading at significantly higher prices than when Brad Langille (GoGold’s CEO) began managing them. Finally, while silver is well below all-time highs, GoGold is building a new base at new all-time highs, leaving no resistance overhead. This combination of strong management and relative strength…

Where To Find Every Ijincho and Sotenbori Silver Safe In Yakuza:…