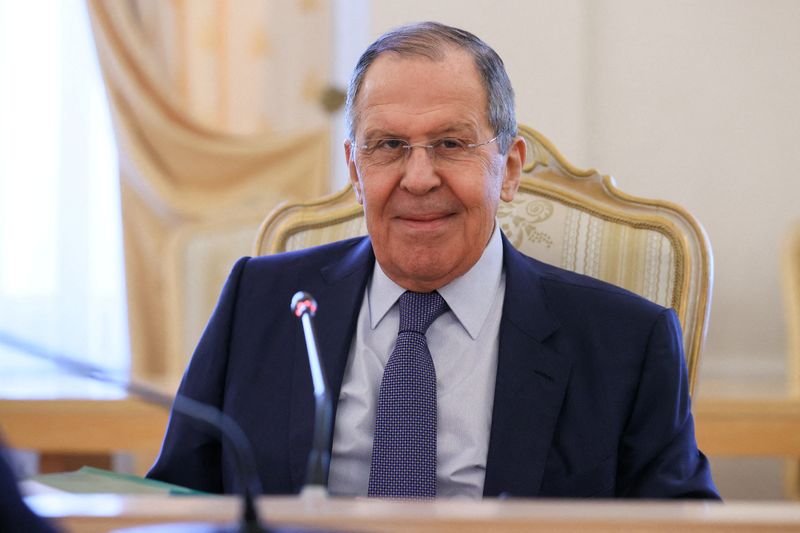 NEW DELHI – Russian Foreign Minister Sergei Lavrov is set to fly to India this week, sources said, finding time to visit to one of the biggest buyers of Russian commodities since the international community began isolating Moscow for its invasion of Ukraine.

There is little sign that buying will slow down any time soon, as more deals get signed. One source said the two countries could discuss smoothening trade payments disrupted by Western sanctions on Russian banks. Media have said he could hold talks in the Indian capital on Friday.

It will only be Lavrov’s third visit overseas since Russia’s Feb. 24 invasion of Ukraine, after a trip to Turkey for talks with his Ukrainian counterpart earlier this month and a scheduled meeting in China on Thursday.

Russia is India’s main supplier of defence hardware but overall annual trade is small, averaging about $9 billion in the past few years, mainly fertiliser and some oil. By comparison, India’s bilateral trade with China is more than $100 billion a year.

But given sharp discounts on Russian since the attack on Ukraine, India has bought at least 13 million barrels, compared with nearly 16 million barrels imported from the country for the whole of last year. Many European countries have also continued to buy Russian energy despite publicly criticising Moscow.

New Delhi has called for an immediate ceasefire in Ukraine but has refused to explicitly condemn Moscow’s actions. It has abstained from voting on multiple U.N. resolutions on the war.

“India will import more items from Russia, especially if it is at a discount,” one senior Indian government official said.

The government has been looking to establish a rupee-rouble trade system and discussions between Indian and Russian financial officials are ongoing, said the source. All the sources declined to be named as the talks were private.

The Indian government and the Reserve Bank of India (RBI) did not immediately respond to requests for comment.

Besides the rupee-rouble trade window, several other options are on the cards, including settling all government and quasi-government payments directly through the central banks of the two countries, said the source.

“India has made up its mind to continue trading with Russia, one way or the other,” said Happymon Jacob, a professor of international studies at New Delhi’s Jawaharlal Nehru University.

“During the Russian foreign minister’s visit, the bureaucracy could definitely bring up the issue of how to continue looking for alternative mechanisms to smoothen trade relations between the two sides.”

Russia’s embassy in New Delhi said it could not confirm the visit. India’s foreign ministry said it had no information to share.

In a sign of sustained ties despite the Ukraine crisis, India is considering allowing Russia to use its funds lying with the Reserve Bank of India (RBI) to invest in Indian corporate bonds, said another Indian government source.

Russia has retained about 20 billion rupees ($263 million) of Indian payments for Russian defence equipment with the RBI.

But another Indian government official said New Delhi would have to diplomatically tackle pressure from the West to be able to maintain its ties with Russia.

U.S. President Joe Biden said this month India was “somewhat shaky” in acting against Russia. A U.S. diplomat said last week after meeting Indian officials in New Delhi that the United States had not asked partners like India to suddenly stop energy purchases from Russia.

Read More: India stands by trade with Russia as Lavrov set to visit By Reuters

Month-End Flows Will Exacerbate Volatility In Pound Vs Euro, Dollar

LME faces backlash from metal brokers for opening during Queen’s…