In an unexpected development for the crypto market, China’s state television has recognized its positive performance. The state-owned channel CCTV2 has presented a program in which it declares Bitcoin and other cryptocurrencies as the best performing assets of the year. The reasons: growth on Ethereum’s DeFi and Covid-19.

The report has been shared by a user via Twitter and among the most important aspects of the video, cryptocurrencies are declared the winner as investment assets with respect to gold and “any other asset class”. However, state television also pointed out the disadvantages of the crypto market:

Bitcoin and cryptocurrencies are the best performing asset this year (bullish). However, due to its speculative nature, the uncertainty remains significantly high (bearish).

State television made a comparison between the best-performing assets. In that sense, they presented data indicating that gold has managed to record 20% gains, but in comparison, Bitcoin has risen 49.48%. Among the assets of the crypto industry, none shows a better performance than Ethereum with an increase of 169.4% in 2020.

According to the Chinese media report, the growth of the protocols in the DeFi sector, as mentioned, is one of the factors that have driven the rally of Bitcoin, Ethereum, and the rest of the market. Data from DeFi Pulse shows that this sector has had one of the biggest booms, accumulating $11 billion in total value locked, at the time of publication, compared to $600 million at the beginning of the year. 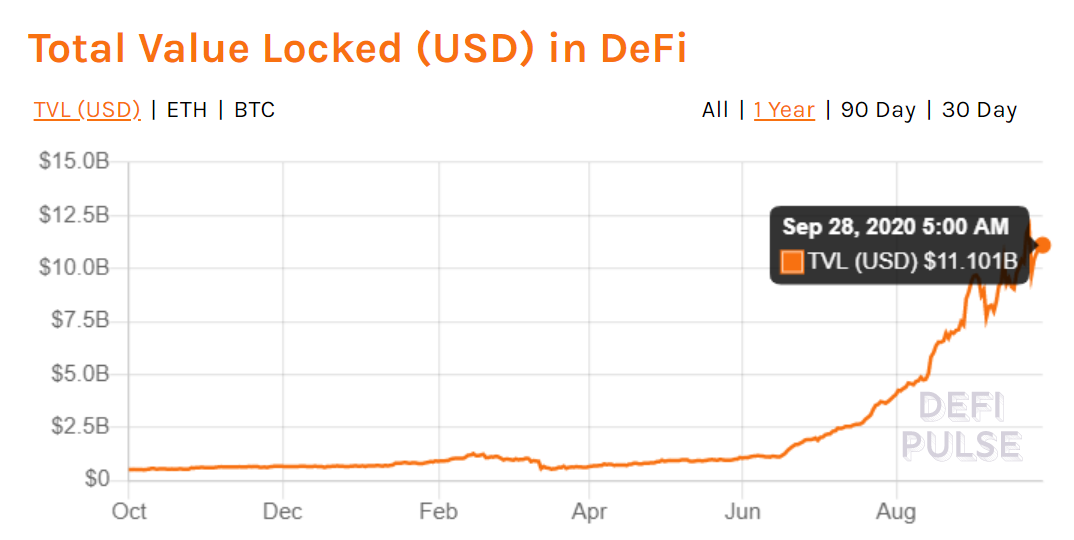 In addition, the Covid-19 pandemic has been a determining factor for investors. According to Chinese state television, investors have entered the crypto market as a way to protect their money against inflation. In addition, CCTV2 indicates that the U.S. Federal Reserve has taken “huge measures” to stimulate inflation and thus weaken the dollar. The report states:

Cryptocurrency advocates believe that bitcoin and cryptocurrencies will preserve its value and are therefore a good hedge against the economy.

In recent months, Ethereum DeFi has attracted a significant number of users from China. The CCTV2 report has had a positive reception on local social networks, such as WeChat. Primitive Crypto founder Dovey Wan said there was a “coordinated effort” from other Chinese media reporting a similar story. Therefore, the Chinese state television report could bring a new flow of users to Ethereum’s DeFi protocols. However, Wan suspects that there may be ulterior motives behind Chinese media coverage of the cryptocurrencies.

Hmm this is an interesting propaganda vibe from CCP’s official media outlets as “参考消息”, Xinhua and CCTV2

the headline “cryptoasset is the best performing asset YTD” was featured on all avenues, news paper, online media and TV

It’s rare for such a coordinated effort pic.twitter.com/2g6VDsV5SE

As reported by CNF, China has taken severe measures against the crypto market since the end of 2019. The Asian giant is preparing to launch its central banck digital currency (CBDC), the digital Yuan. The asset is still in its test phase in selected regions of the country, but it is already worrying Western authorities who, like the European Union, have rushed to develop their own CBDC as a counterweight to the Chinese asset.

10 Crypto Assets Technologically Superior to Bitcoin and XRP, According to Weiss

Sheldon Mobile Food Bank Is NEXT Monday, the 14th; Unity Meal On The 21st –

Ethereum Down More Than 5% Within 24 hours – Ethereum…

When Ethereum Options Show Continuing Bullish Bias is it Time to…

Eco-friendly Ethereum Merge is a ‘game changer for…

Desperate bulls face the axe as BTC pukes before $25,000

Coin Center Chips In: Is A Proof-Of-Stake Ethereum Suddenly A…

Cryptocurrencies To Watch: Week of September 12