Silver Will Soar on Its Next Rally

Are you fearful, or are you getting greedy?

That’s the question silver investors should be asking themselves now.

Novices have been panicking, while seasoned investors are salivating at the opportunities.

Silver has recently corrected by almost 8$ or 36% since peaking in early August. The drop to $22 brought it to less than half its all-time high.

I don’t think silver’s correction is quite over yet, but it’s getting closer to a trigger point.

The gold-silver ratio is a great longer-term indicator of silver’s value relative to gold, and to search for signs of what might lie ahead for the metal. 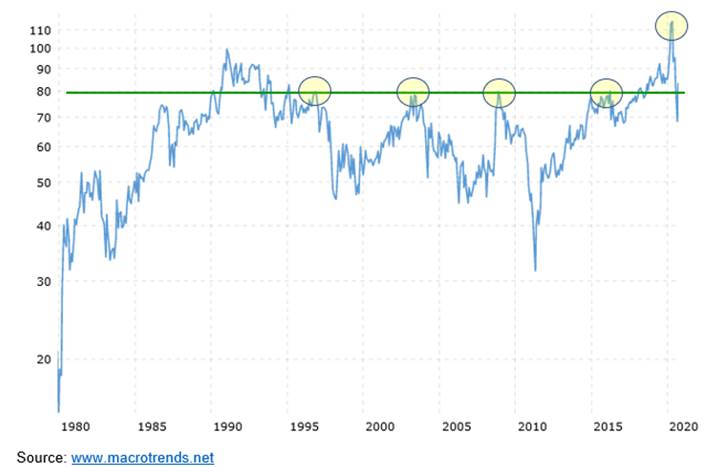 Looking back several decades, each time the ratio reaches 80 it tends to reverse. From there, silver typically outperforms gold as the ratio falls.

This past March, we reached an all-time high of 126. The ratio underwent a rapid mean reversion since then, dropping quickly to 70 before bouncing recently back above 80. I think there’s a lot more in store, and that once this correction phase is over, the ratio will continue to fall further.

In the first half of silver’s secular bull market from 2001 to 2011, taking it from $4 to $49, the metal underwent several sizeable price corrections.

In fact, silver experienced four corrections of 20% or more, with the largest drawdown being a whopping 57% in the midst of the 2008 financial crisis. And yet, silver went on to rise fivefold from that 2008 low to its 2011 peak. Needless to say, sellers were sorry, while patient holders were very happy.

That’s why in my view, the recent correction of 36%, though dramatic and swift, is temporary.

Right now, “smart money” silver hedgers are basically in a neutral stance. Silver seasonality, meanwhile, suggests some weakness or consolidation could still lie ahead in the near term.

In my silver article of two weeks ago, I noted how the silver price had been forming a symmetrical triangle pattern, and that momentum indicators were pointing to a downside move that could reach $23$24. 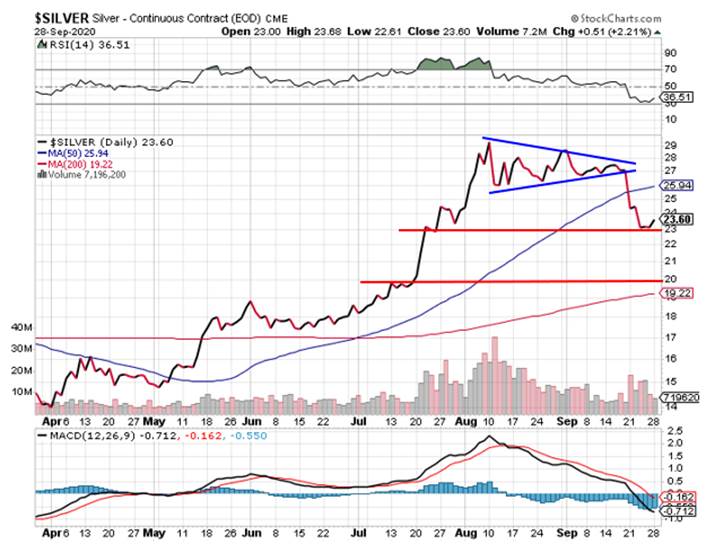 That’s exactly what we got. The breakdown came shortly after, pulling silver into my expected price range. At this point, silver could put in a short relief rally, perhaps to the $26 level (50-day moving average), but I would not be surprised if it then reverses again to retest $23 or even $20.

And if we look at the ratio of silver stocks to silver, we can see it corrected, then moved mostly sideways since silver peaked in early August. 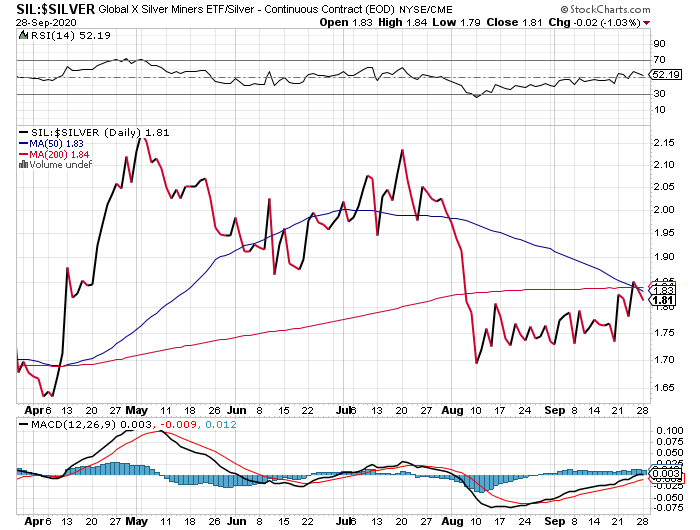 In the past week it rose slightly, but I think it could weaken once again as silver finishes correcting. The 50-day moving average has just crossed downwards under the 200-day moving average, pointing to likely further relative weakness for silver stocks.

The longer-term view indicates plenty of strength for silver.

In a recent report, Bloomberg Intelligence’s Mike McGlone said in his view silver’s seven-year bad luck streak is likely over, indicating the metal’s rise back above $30 was only a question of time.

I would agree. But I see silver not only heading above $30, I expect it to reach new heights, shocking many observers in the process.

Still, in the near term, my research suggests silver’s consolidation/correction phase has further to run before the metal resumes its climb.

I’ll be sure to keep you posted on my silver outlook, and let you know when I think it’s finally time to buy.

Peter Krauth is a former portfolio adviser and a 20-year veteran of the resource market, with special expertise in energy, metals and mining stocks. He has been editor of a widely circulated resource newsletter, and contributed numerous articles to Kitco.com, BNN Bloomberg and the Financial Post. Krauth holds a Master of Business Administration from McGill University and is headquartered in resource-rich Canada.

Read More: Silver Will Soar on Its Next Rally

Upper Perkiomen’s Rozanski, four others turn silver to gold at…

There is no ‘silver bullet’ to developing willpower

Who owns hundreds of millions of ounces of silver