Although Bitcoin was consolidating at the time of writing, it was putting a lot of downward pressure on many of the market’s altcoins. Major cryptocurrencies like Cardano were moving lower down the price scale, whereas mid-cap assets like Synthetix and VeChain were trying to move forward with a stagnated price on the charts. 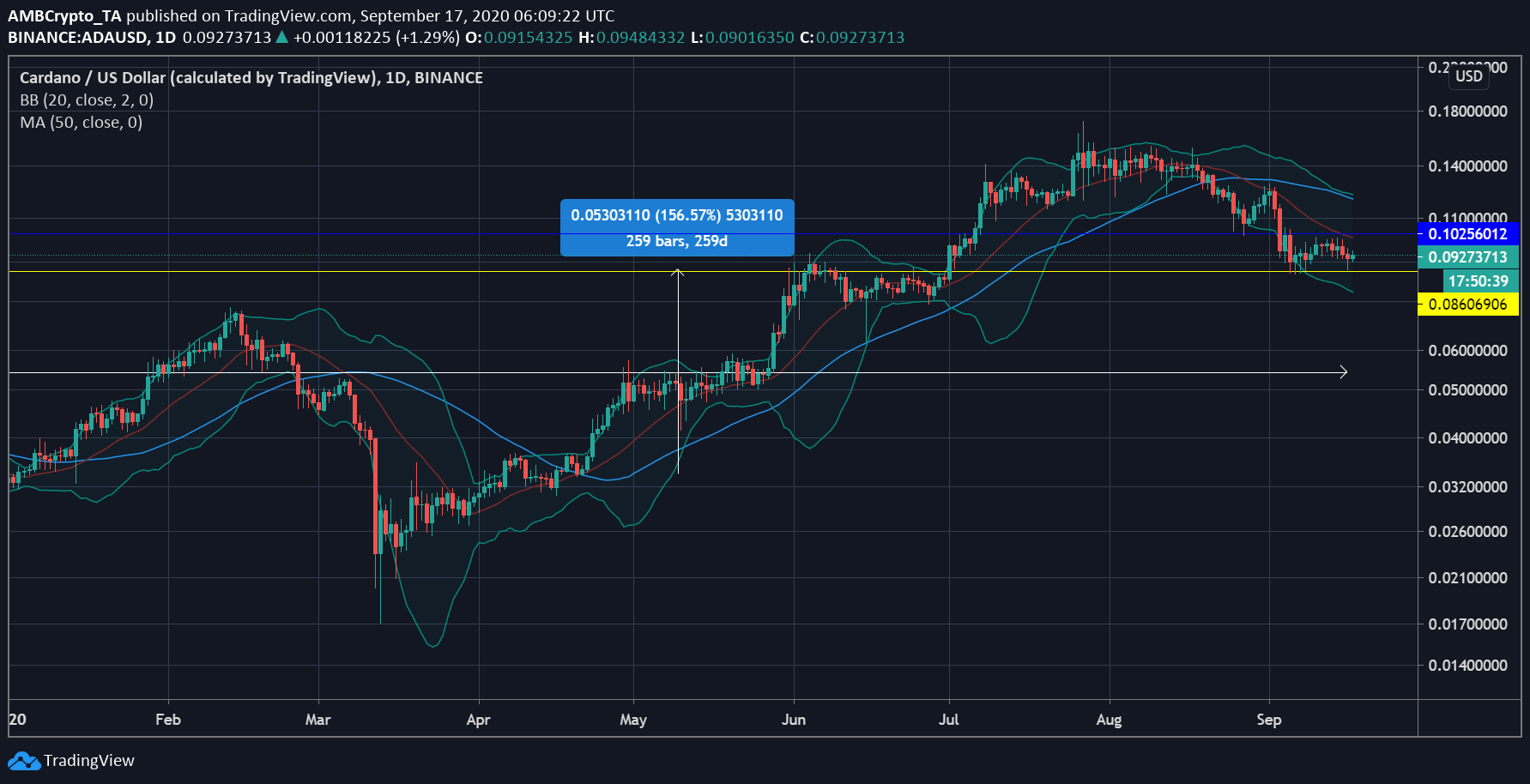 Cardano was in the news recently after the CEO of IOHK, Charles Hoskinson, revealed that with Voltaire, the final phase of development, Cardano’s network will become a self-sustaining ecosystem.

With a great developmental roadmap ahead, the ADA market was poised for tremendous growth in the future. However, at the time of writing, it was returning 156% in YTD to its investors. With the price of the digital asset moving lower on the charts, the ADA market might be awaiting more volatility. The mouth of the Bollinger Bands was noting a divergence, a sign of the volatility rising and a possible price swing. However, the same is also likely to push the price further south.

This bearishness in the ADA market was made visible by the 50 moving average and the signal line that took its position above the price bars, confirming the downwards moving price. However, strong support was found at $0.0860, a level that could help the price bounce back, as has been observed before.

Synthetix [SNX] has been one of the most popular projects in the DeFi space, with SNX having reached $1 billion in TVL, following Compound and Aave. SNX hit a peak in August at $7.32, with the DeFi token rallying by over 400% in YTD.

Despite the falling altcoin market, SNX’s market registered good resistance and did not dip as much. The price of the digital asset was $4.78, at the time of writing, with SNX having bounced back from the support at $4.08. This has been a strong support level for SNX, one that has been tested multiple times since August. The coin may be preparing to breach the immediate resistance at $6.02 if a bullish trend takes over the market.

The Parabolic SAR indicated that the price trend had changed since the markers had aligned themselves under the candlesticks.

VeChain was another mid-cap asset that has been subjected to a devaluating market. VET had been shedding its value since August and has been undergoing consolidation over the past few days. The price of the asset was bouncing between $0.0140 and $0.0110, levels that were also its immediate resistance and support levels.

As per the MACD indicator, the MACD line was undergoing a bullish crossover with the signal line, a sign of growing bullish pressure in the market. However, the momentum wasn’t enough to keep the trend going and could change soon.

Calling All Contrarians: These 3 Cryptos Could Take Off in 2023