Ethereum Struggles Under the Weight of DeFi Growth: Is ETH Doomed to Fail?


For a growing number of Ethereum users, the “rent is too damn high.”

Earlier this week, ETH miners–who are responsible for confirming transactions on the Ethereum network–were raking in cash. According to on-chain analytics firm Glassnode, miners on the network earned over $500,000 in just one hour on September 1st.

The huge amount of fees was collected as the price of ETH rallied ten percent to $486, a new yearly high. The rally is thought to be related to the launch of Sushiswap, a fork of Uniswap. (Uniswap is a decentralized exchange in that exists in the form of two smart contracts on Ethereum.)

Upon its launch, Sushisap hit more than $1 billion in total value ‘locked’ in its platform under 24 hours. 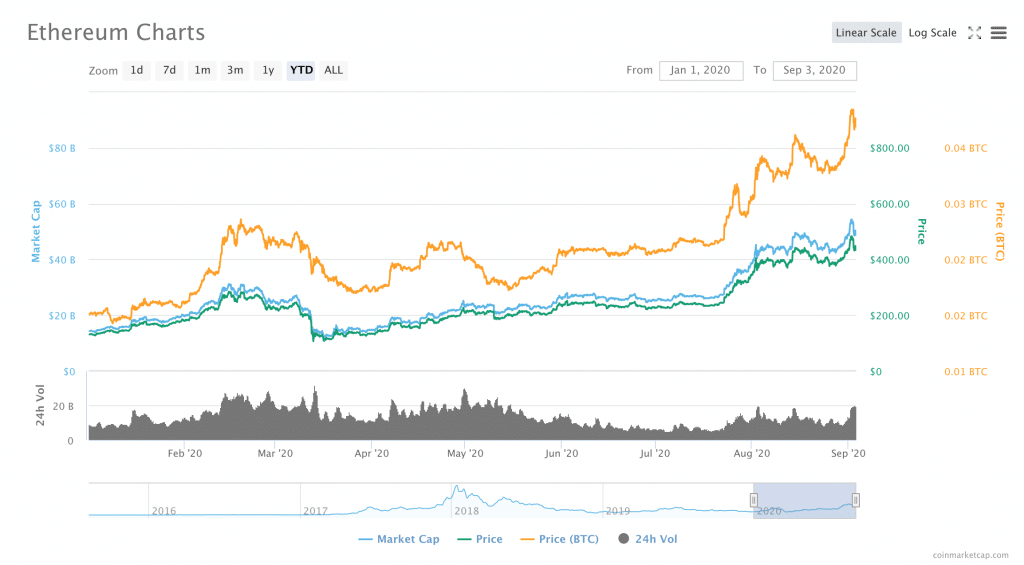 While the price rally and the success of Sushiswap seem like positive things for the Ethereum ecosystem, however, the deluge of network fees that accompanied the rally are pointing to an increasingly worrisome issue for Ether: congestion.

Is Ethereum scalable enough to support the growing DeFi ecosystem?

A number of Ethereum users and commentators have raised concerns about congestion on the network, saying that Ethereum may not be a viable platform for the continued growth of the decentralized finance (DeFi) sector. After all, much of DeFi’s explosive growth in 2020 has taken place on the Ethereum network.

At the same time, however, Ethereum creator Vitalik Buterin has fired back against critics, saying that second-layer solutions to Ethereum’s scalability problems exist–it’s just that people aren’t using them.

To those replying with “gas fees are too high”, my answer to that is “well then more people should be accepting payments directly through zksync/loopring/OMG”. Seriously, scaling to 2500+ TPS for simple-payments applications is here, we just need to… use it. https://t.co/J2KMJyLKv6

At the same time, Ethereum is moving slowly to the launch of ETH 2.0, a software upgrade that, in theory, should improve the network’s ability to handle high levels of transactions.

However, not everyone is convinced that the layer-two solutions–nor the improvements to the network itself that will happen in the switch to ETH 2.0–will be enough to adequately solve Ethereum’s scalability issues.

Among these Ethereum skeptics is Stuart Popejoy, co-founder and president of blockchain infrastructure firm Kadena. In an email to Finance Magnates, Popejoy called “the demise of the narrative that ETH 2.0 is a viable future platform” the “biggest 2020 development in DeFi.”

Indeed, the increased popularity of DeFi platforms has certainly brought a wave of new activity and new users to Ethereum–however, Dave Parkinson, the Chief Operating Officer of Lamourie Public Relations, told Finance Magnates that “the number of DeFi projects attempting to run simultaneously on the Ethereum network has inevitably exposed the problems with scalability, the way CryptoKitties did a few years ago.”

Ahh, yes. Remember CryptoKitties? The adorable game of trading digital cats that gummed up the Etheruem blockchain so bad that transactions were taking hours–days, even–and cost a fortune?

At the time, the incident was largely regarded as a fluke. While some analysts pointed out the implications that the CryptoKitties traffic jam had for Ethereum’s future as a scalable (or non-scalable) platform, most Ethereum users watched the congestion pass by without much notice.

Now, however, Ethereum users don’t have that luxury: “ETH 1.0 is clearly on a warpath to bleed millions of dollars in gas fees over the next couple weeks,” Stuart Popejoy said. “Eventually there will be a new equilibrium when enough gas gets emitted to bring prices back to reality.”

In other words, Popejoy believes that a forthcoming prolonged period of high fees could eventually cause Ethereum prices to go down–and, possibly, for users and developers to start seeking an alternative platform.

Read More: Ethereum Struggles Under the Weight of DeFi Growth: Is ETH Doomed to Fail?