Tuju, during a press conference on Friday, October 2, stated that DP Ruto was banned from using the party headquarters to operationalise his 2022 campaign.

“The DP, a self-declared 2022 presidential candidate, will not be allowed to use the party headquarters as a centre of operationalization for his campaigns and for intimidation,” the Jubilee secretary general said. 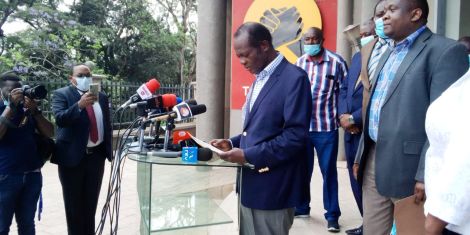 Tuju stated that the party’s National Managment Committee had recommended to the National Executive Committee that Ruto be suspended as the Deputy Party Leader after he opened the parallel Jubilee Asili offices. 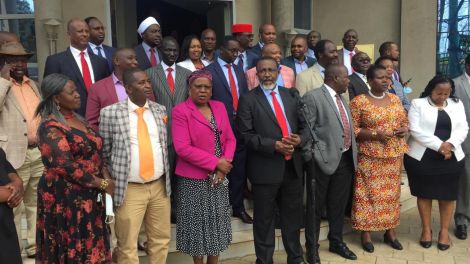 The SG stated that the measures instituted were painful but had been necessitated by the conduct of the Ruto’s allies and the establishment of the Jubilee Asili Centre.

The Jubilee Secretary General stated that DP Ruto’s visit to the party’s office almost caused a confrontation with MPs from the rival Kieleweke faction.

Tuju stated that it took a lot of convincing to make Ruto’s rivals back down from going to the party headquarters and confronting him on Thursday.

“Yesterday, the DP turned up at the party headquarters with more than 30 MPs, many of them known abusers of the president…foul-mouthed MPs that are on record attacking government projects like Huduma Namba. That move almost created an ugly confrontation.

“This country is bigger than this party. We pledge our support and loyalty to President Uhuru Kenyatta until the end of his term, and we will not countenance any attempted power grab as was witnessed yesterday,” the secretary general stated.

This comes just days after Ruto skipped the National Covid-19 Conference held by the Head of State at the Kenyatta International Conference Centre (KICC) on Monday, September 28.

State House stated that it had invited the DP. His allies, however, refuted arguing that they had frustrated him countlessly and never invited him to the said meeting.

Raphael Tuju, Sec. Gen., Jubilee: Yesterday, the DP turned up at the party HQ with more than 30 MPs, many of them known abusers of the President…foul-mouthed MPs that are on record attacking gov’t projects like Huduma Namba. That move almost created an ugly confrontation. pic.twitter.com/4ccxJs0r8T

Occidental Petroleum Finally Has Some Good News for Investors

TraQtion Works with California LGMA to Modernize Audit and Data…