Dry and hot conditions and higher wind speads expected to continue to fuel the wildfire Sunday. Crews have contained 40 percent, upgrade from 20 percent on Saturday.

KITTITAS COUNTY, Wash. – The Evans Canyon wildfire continues to spread through Kittitas and Yakima County as fire crews work to contain 40% of the fire, and increase from 20% Saturday.

As of Sunday morning, the wildfire has spread over 75,817 acres across central Washington, just 8 miles north of Naches, Washington. The fire has now been 40% contained after almost 1000 fire crew personnel worked to contain its spread since August 31st.

Northwest Incident Management Team says higher winds will also be a factor in contributing the spread of the wildfire, winds around 10-15mph NW, up to 25mph. Higher winds are expected through Tuesday, up to 35 mph. 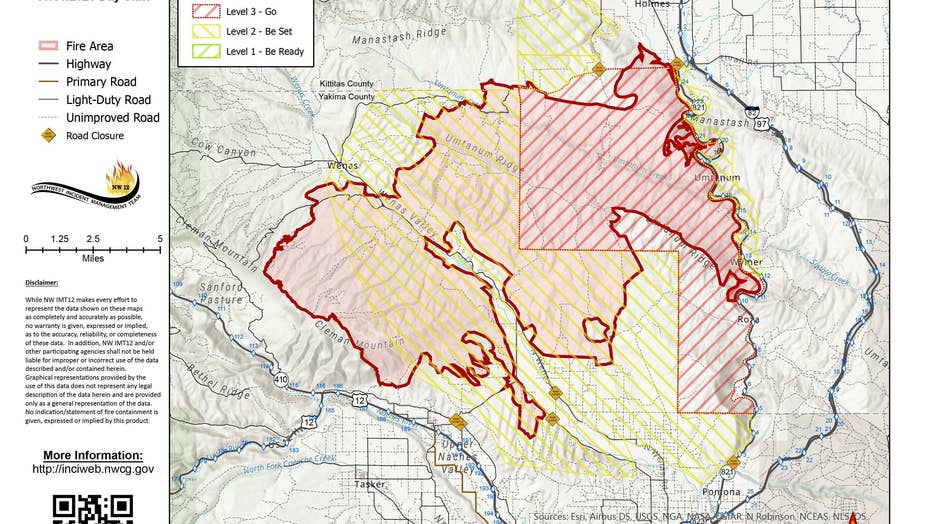 According to InciWeb and Southeast Region Department of Natural Resources, parts of Kittitas County close to Umtanum remain a Level 3 evacuation zone, while parts of Kamia County closer to Wenas and Upper Naches Vallery remain at Level 2.

Since Saturday, fire crews made significant progress containing the most of the southern part of the fire around N. Wenas Rd.

Washington State Department of Ecology issued an Air Quality Alert for the Yakima region, starting Sunday through Tuesday morning due to the heavy smoke in the area caused by the Evans Canyon wildfire. Officials say air quality will reach unhealthy levels at times.

NWIMT officials say most of the damage overnight burned through unburned islands, brush and vegetation along the Yakima River. Crews will work throughout the weekend to monitor and put out remaining hotspots.

Washington State Department of Natural Resources is asking people in the area to avoid campfires and recreational burning as there remains a burn ban in effect for the area. Due to hot and dry conditions, burn bans will be in effect for much of central Washington as fire crews continue to extinguish the wildfire.

Why Demand For Seaweed Is About To Boom