The Meeting of the Central Bankers at Jackson Hole has just concluded with the main item of interest being the speech made by The Chairman of Federal Reserve, Jay Powell. A major policy shift was the theme in that the U.S. Central Bank was to allow “average inflation targeting.” Roughly interpreted means the Fed will allow inflation to run “moderately” higher than the central bank’s stated goal of 2% “for some time”

This is a vague statement and begs the question of how much higher is inflation acceptable? 3% or 8% and for how long is “for some time” two months or three years? The Federal Reserve has no real targets and therefore can not be held accountable for their actions as this policy is opened ended to say the least.

The takeaway from this Jackson Hole Jolly is that inflation is coming and that it will be supportive of gold and silver and their associated stocks.

A Brief Look At Some Of The Current Issues

As we see it there two major issues, firstly we are heading into a recession which was long overdue, and it will present its own set of challenges for us all face and deal with. The second issue is that the global economy is being battered by the Coronavirus pandemic. In an attempt to lessen the impact of the recession and also to battle the pandemic record amounts of cash is being generated in order to cushion these two body blows. This flood of cash is already having an impact on the US Dollar as the chart below clearly shows that it has been in decline for the last 5 months or so.

The US Dollar Chart 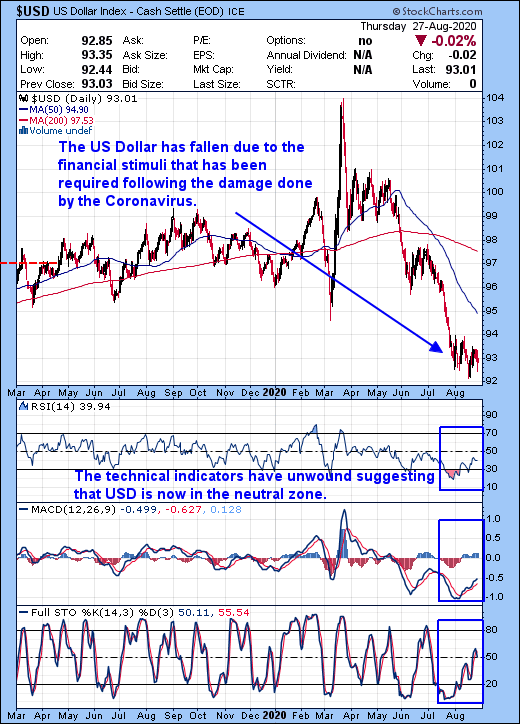 The technical indicators have unwound and are basically neutral suggesting that the USD might trade sideways in the near term, but do not count on it.

The chart below shows the progress made by gold. Over a 12-month period it has increased in value from $1400/Oz to $1932/Oz registering an increase of some 38%, which is a terrific start for a Bull Market. Gold had managed to trade as high as $1700/Oz before being hit by the pandemic in March 2020, however, it recovered quickly and has continued its trek to higher ground. 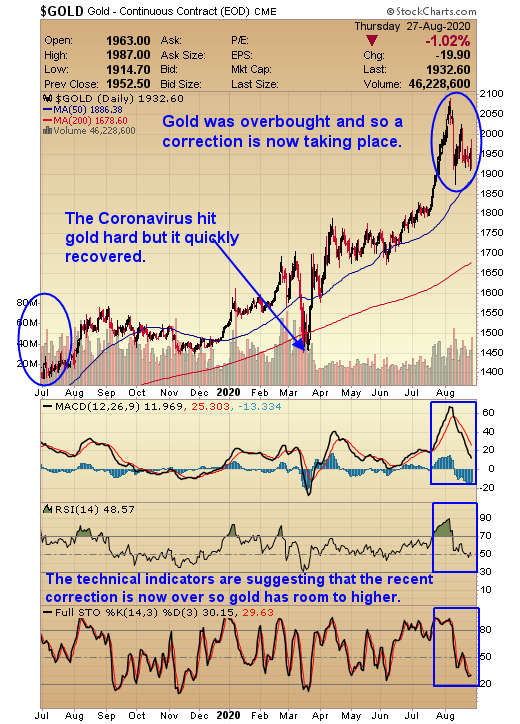 The days of The Central Bank targeting the ‘normalization’ of interest rates is dead and buried. Interest rates are now expected to stay low for the foreseeable future and coupled with more Quantitative Easing we expect the US Dollar to decline even further in value. This decline in value along with the misery amount of interest on offer for our investment funds will cause investors to rotate out of currencies and into the field of hard assets, one of which is the precious metals sector.

There are a number of ways that an investor can gain exposure to this sector of the market which are as follows:

Purchase shares in an ETF such as SPDR (GLD)

Purchase stock in the Mining and/or Royalty companies.

Trade options on the above.

If you are new to this sector, then acquiring some physical gold and silver and keeping it in your possession is a good starting point. An ETF offers excellent liquidity should you wish to trade in and out of this sector. Mining and Royalty companies take some work, due diligence as they say, however some of them can increase in value at two or three times the price of the underlying commodity. The purchase and disposal of options can lead to sleepless nights and is best avoided unless you are an experienced options trader.

I acquired physical gold and silver many moons ago, so I tend to focus on the Mining/Royalty companies at the moment. Four of my favorite stocks are listed below, however, it is your hard-earned cash that is on the line so please do some homework.

The Federal Reserve will continue to implement a policy of financial support via the mass production of Dollar Bills. This will dilute the value of the US Dollar and as gold has an inverse relationship to it, gold will be the beneficiary.

I remain firmly in the camp that these dips should be bought aggressively as this bull market is in its infancy.

Got a comment, then please fire it in whether you agree with us or not, as the more diverse comments we get the more balance we will have in this debate and…

What Is An mRNA Coronavirus Vaccine?

Where To Find Every Ijincho and Sotenbori Silver Safe In Yakuza:…

Column: The looming ban on Russian crude has the oil…