Laredo Petroleum (NYSE:LPI) mentioned that it was planning on restoring oil production in 2021 to full-year 2019 levels, with a development focus on its oil-heavy Howard County inventory. This would result in Q4 2021 oil production potentially ending up 40+% higher than Q4 2020 oil production. At current strip prices, it appears it will be able to achieve this without cash burn.

Laredo still has a lot of work to do beyond 2021 though. Its unsecured bonds remain trading in the 60s, pointing to the potential challenges in refinancing those, although the next unsecured bond maturity remains over four years away.

Laredo is currently planning on developing its Howard County acreage fairly heavily starting in late 2020. It expects to complete a 15-well package in Q4 2020, boosting production starting in Q1 2020. It also currently plans on another 50 to 55 completions in 2021. 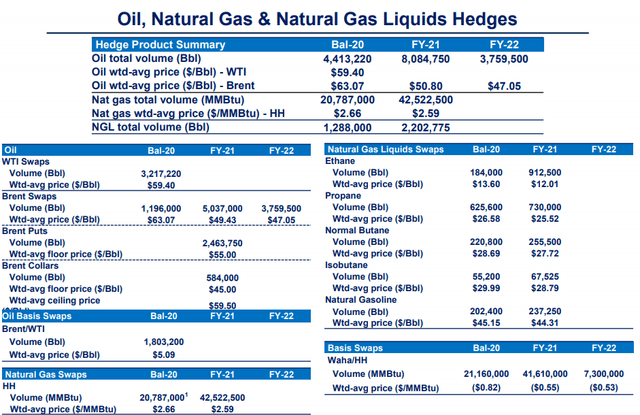 At current strip prices, Laredo is projected to generate $652 million in revenues after hedges. Laredo’s oil hedges generate a fair amount of positive value, but this is partially offset by its natural gas hedges. Henry Hub strip for 2021 is around $2.90 now, while the WAHA basis differential has narrowed to around negative $0.30.

Laredo now expects $325 million to $350 million in capital expenditures in 2021. This would result in it generating $2 million in projected positive cash flow at current strip prices while increasing its oil production considerably.

Laredo’s unsecured bonds are currently trading in the 60s, so there is some potential for it to reduce its debt and interest costs by repurchasing debt at a discount.

Laredo has a $100 million restricted payment basket with its credit facility. At current bond prices, that would allow it to repurchase approximately $150 million in bond debt. This would reduce its net debt by $50 million and its annual interest costs by approximately $12 million.

Buying back debt at a discount would be incrementally helpful to Laredo, but would not be a gamechanger by itself. The reduced interest costs would improve Laredo’s oil breakeven point (based on 2021 production levels) by a bit over $1. Laredo’s leverage would improve by 0.2x (based on 2021 production levels, $50 WTI oil and the combined impact of immediate debt reduction and several years of reduced interest costs).

I’d still favor Laredo’s bonds over its stock, although it does have some decent speculative potential now that it is trading under $12. Laredo’s long-term value depends on its ability to deal with its unsecured notes, starting with the January 2025 maturity. If Laredo manages to successfully deal with that maturity, the 2025 notes will have provided approximately 115% returns through a combination of interest payments and principal repayment.

Laredo’s oil production growth should allow it to deleverage a bit if oil prices co-operate. At 2021 production levels and $50 WTI oil, Laredo’s net debt may end up around 2.6x. A 3.0x EV/EBITDA valuation (with debt valued at par) would then result in its shares being worth approximately $16. Thus the stock appears to have decent upside in a longer-term $50 WTI oil scenario, but the bonds have less risk as well as considerable potential upside as well.

Laredo looks capable of generating substantial oil production growth by the end of 2021 as it develops its oil-heavy Howard County inventory. It should be able to avoid cash burn at current strip prices, and the increased oil production should contribute to Laredo’s deleveraging efforts.

Although low-to-mid $40s WTI oil would be acceptable for Laredo in the short run, it does still need $50s WTI oil beyond 2021 in order to put itself in a better position to address its unsecured debt maturities. Laredo’s bonds have high interest rates and are also trading at substantial discounts to par and are attractive ways to play a potential rebound in oil prices without as much risk as the stock.

Ukraine wants lower cap on Russian oil, at $30-$40 per barrel

Morgan Stanley point to 7 uncertainties for oil in 2023 By…

Oil up amid wrangling over Russian oil price cap

Ghana plans to buy oil with gold instead of U.S. dollars

Thermal Enhanced Oil Recovery market is projected to grow at a…