Natural Gas Stalls- More Downside Could Be On The Horizon (NYSEARCA:KOLD)


In last week’s natural gas piece on Seeking Alpha, I wrote, “With the price of natural gas at just below the $2.70 per MMBtu level on August 28, inventories at a substantially higher level than at this time in 2019 and the five-year average, and with three months to go in the injection season, I prefer the KOLD product with a tight stop. If the market continues to rally and stops me out, I will look to re-establish a short position at a higher level.”

The price of the energy commodity settled at $2.657 per MMBtu on the October futures contract on Friday, August 28. Over the recent sessions, it traded as low as the $2.415 level.

I continue to believe that the elevated level of inventories in storage across the US is a bearish fundamental factor for the price of natural gas futures. At the same time, with eleven weeks left until the start of the 2020/2021 withdrawal season, where stockpiles will decline, there is still time for speculative bears to push the price of natural gas lower. After all, they have made lots of profits shorting the energy commodity throughout 2020. Since the November 2019 high at $2.905, the price declined to a low of $1.432 per MMBtu in late June, the lowest price of this century, and since 1995.

The ProShares Ultra Bloomberg Natural Gas long ETF product (BOIL) and its bearish counterpart (KOLD) are double leveraged trading tools for those market participants looking to participate in the volatile natural gas market without venturing into the futures arena.

As the daily chart of October NYMEX futures highlights, natural gas failed at just below the $2.75 level and was trading at below $2.60 on Friday, September 4. The total number of open long and short positions was stable at the 1.24 million contract level. Price momentum and relative strength indicators turned lower from overbought readings and were below neutral territory at the end of last week. Daily historical volatility at around 52% was below the midpoint in August as the price corrected from the recent high. However, natural gas put in a bullish reversal on the daily chart on September 4.

The weekly chart illustrates the 91.5% price recovery on the continuous contract from $1.432 in late June to $2.743 in late August.

Price momentum and relative strength were turning lower on the weekly chart, but the slow stochastic was still displaying an overbought condition. Weekly trading ranges have been wide, so weekly historical volatility was at 63.4%.

Natural gas rose to a new high for this year, but the price failed to reach its critical technical resistance level at the November 2019 high of $2.905. With a little under three months to go before the peak season of the demand in the winter months begins, it may have been too early for a substantial rally in the natural gas futures market.

Inventories continue to trickle into storage 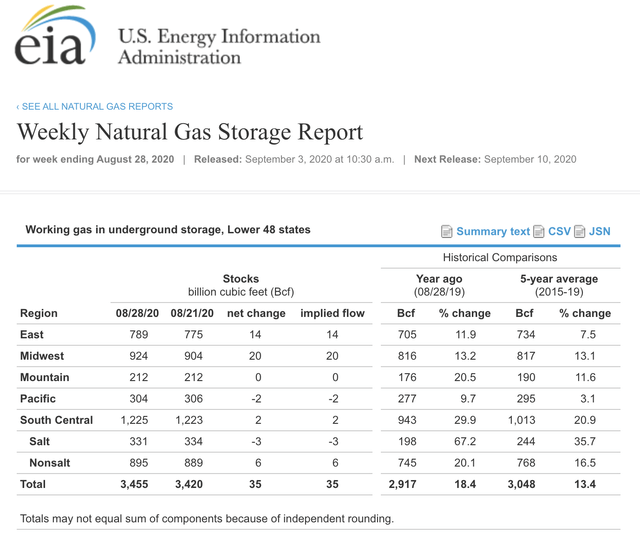 As the chart shows, 35 billion cubic feet of natural gas flowed into storage for the week ending on August 28. The total amount of natural gas in inventories stands at 3.455 trillion cubic feet, 18.4% above last year’s level, and 13.4% over the five-year average for the end of August. It was the twenty-second consecutive week where the percentage above last year’s level declined, after rising to a high of 79.5% for the week ending on March 20, 2020.

Two months to go until the withdrawal season begins

With only eleven weeks to go before inventories start to decline during the winter months, natural gas stocks are at a level where supplies should be sufficient to meet all requirements even if the 2020/2021 season is colder than in the past years. Last year, stockpiles rose to a high of 3.732 tcf. Reaching that level would require an average injection of only 25.2 bcf over the coming weeks. Natural gas stocks rose above the four tcf level only twice since the EIA began reporting data. An average rise of 49.6 bcf during the rest of the injection season would push inventories above that level.

Meanwhile, last week’s injection was low because Hurricane Laura, a category four storm, hit energy-producing states along the Gulf of Mexico. The delivery point for NYMEX natural gas futures is the Henry Hub in Erath, Louisiana, which is not far from Vermilion Bay and the Gulf of Mexico. The storm weighed on natural gas production and oil output as the EIA reported that daily crude oil production dropped to 9.7 million barrels per day for the week ending on August 28.

Read More: Natural Gas Stalls- More Downside Could Be On The Horizon (NYSEARCA:KOLD)

Instagram model who poses as Catwoman jailed for masked robberies

Where does your debris go after it leaves your yard?

Halliburton, Schlumberger, and Other Energy Stocks Poised to Keep…