Ultrapar Participações S.A.’s (NYSE:UGP) net revenue for 2Q20 was down by a little more than 27% as demand for petroleum products decreased significantly due to worldwide lockdowns. In the first half of the year, the company’s net income was down 40% from R$ 363 million to R$ 219 million (y-o-y). Even with these results, the company’s free cash flow was up over 18% due to a reduction in capital expenditures and improvements in working capital. The objective of this article is to cover the company’s Q2 2020 results and my updated 2H20 forecasts.

As I have mentioned in my past articles, UGP is essentially five separate companies, and because of this, I have to do a sum of the parts (“SOTP”) valuation on it. I will dig a little deeper into this quarter’s results than I usually do for the other companies that I cover as this organization is complex. During this overview, I will use ratios that I created, and these ratios may not represent the exact market inputs that they are intended to understand. For example, in Ultragaz’s section, I mention the spread, which is simply the net revenue per ton minus net cost per ton. I have never seen this calculation used by the company to estimate the difference between LPG gas cost and its sales price.

Ipiranga’s revenue was down 32.2% compared to the same period last year. According to the company, the otto cycle and diesel sales volume in April decreased by 37% and 17%, respectively (y-o-y). In May and June, sales volume began to increase, though they never returned to normal levels.

Figure 1 shows that the average net sales per cubic meter in 2Q19 was 3.25, and this quarter, it was 2.67, a 17.8% decrease. Volume decreased by 17.5% during the same period. After examining both these values, we can say that this quarter’s 32.2% decrease in sales was a result of both a drop in fuels price and demand.

Gross margin decreased from 4.3% in 2Q19 to 2.6% in 2Q20. Ipiranga accredits the decline in gross margin to the consecutive adjustments of fuel prices by Petrobras (NYSE:PBR) during the period. 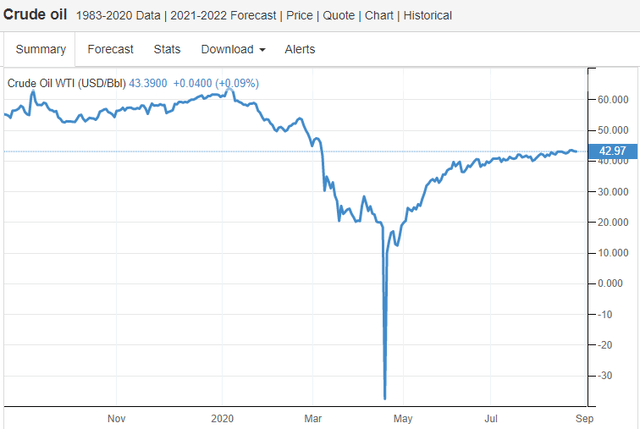 The directors at Petrobras did not wake up one morning and decide to reduce the price of fuel; they were attempting to follow the market. As seen in Figure 2, crude oil prices experienced high volatility during the second quarter due to the adverse effects of the coronavirus. The role of Petrobras’ fuel pricing policy is to reduce volatility to protect consumers, but during this quarter, this proved to be impossible. When volatility is high, it typically causes a decline in Ipiranga’s gross margin. This same principle occurs in food companies that depend heavily on commodities. It is the nature of the beast when investing in a commodities-based business.

SG&A declined by 22.5% compared to last quarter and 34.3% compared to the same quarter the previous year. The organization was able to reduce its expenses by taking advantage of the Brazilian government’s payroll program. According to the company, client default levels presented a slight increase, which slightly increased SG&A expenses but not a noticeable amount.

EBITDA margin decreased from 2.5% in 2Q19 to 1.4% in 2Q20, mainly due to the decrease in gross margins caused by highly volatile crude oil prices. Depreciation and amortization boosted the EBITDA margin by 1.5 percentage points as the EBIT margin was -0.1% in the quarter.

In figure 1, the dotted orange line and purple colored columns represent my estimates for 2S20. Average sales per m3 estimates are based on current crude and future crude oil prices that can be found at Trading Economics. The forecasts for average volume are based upon historical estimates and the assumption that demand will return to Q1 2020 levels (a V-shaped recovery which seems to be the reoccurring theme in the market). Using these estimates, I believe that Ipiranga’s net revenue for 2020 will decline by 21.4% from R$ 75,453 million to R$ 59,308 million. The decline in average fuel price is responsible for over 11 p.p. of the decrease in revenue, and the rest is due to the drop in demand.

In 2Q20, Oxiteno’s revenue increased by 8.4% on a year-over-year basis. According to the company, coatings, automotive, and oil & gas segments experienced weaker demand, while home & personal care and crop solutions segments experienced an increase in demand. These changes in demand were a result of COVID-19.

Compared to 2Q19, volume sold decreased by 8%, while the average price increased by 17.8%. The average…

If You Think Apple Is a Buy After Its Stock Split, You Should Check Out Jamf

Companies In The Parenteral Nutrition Market Are Launching Olive…

The mutual funds loading up on oil stocks: Morningstar report

Column: The looming ban on Russian crude has the oil industry on…

We’re Drawing the Wrong Lesson From the Third Energy Crisis