All eyes are on Augusts’ US employment report in the final hours of the trading week. It is expected to show that the economy added 1.35 million jobs last month while the unemployment rate dropped from 10.2 to 9.8 percent, marking the first single-digit print in five months.

A recent downturn in realized US economic data outcomes relative to baseline forecasts warns that analysts’ models have become too rosy, meaning disappointment risk might be on the rise. Such a result could weigh heavily on market-wide risk appetite.

That much was demonstrated with great effect as a soggy service-sector ISM survey crossed the wires yesterday. The subsequent meltdown on Wall Street seemed to emphasize that – after months of exuberance stoked by Fed accommodation – the state of the underlying economy is market-moving anew.

The US central bank has strenuously explained moving to a hands-off approach in recent weeks. A series of official pronouncements ahead of, including, and following the Jackson Hole symposium translated to say the central bank sees its role as supportive of economic recovery, but not initiative of it.

That has fundamentally challenged the underlying logic guiding markets in the past four months: that however dismal the data, the Fed’s implicit commitment to financial stability will limit scope for risk-off liquidation. If such a “Fed put” is not automatically assumed, event-driven volatility is an ongoing concern.

A weak jobs report might thus put markets in a defensive posture, weighing on sentiment-linked assets including crude oil. The US Dollar might rise as the sour mood boosts its appeal as a haven of liquidity, undermining the appeal of anti-fiat alternatives and pulling gold prices lower.

Get Your Free Gold Forecast

Gold prices slipped past trend line support guiding them higher since March, warning that a major top is in place. Confirmation on a daily close below the $1900/oz figure may set the stage for a test of support clustered around the $1800/oz mark. A move back above the trend line sees initial resistance at 2015.65. 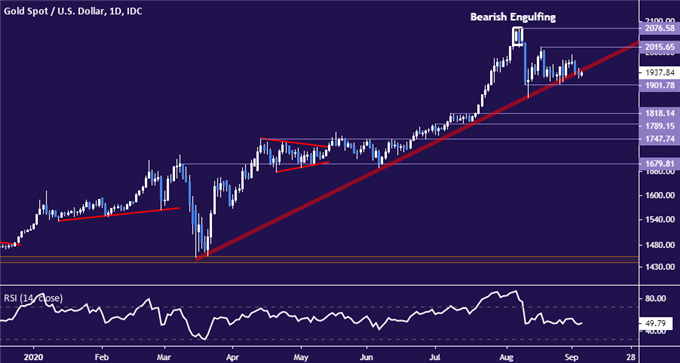 Crude oil prices broke down from a Rising Wedge chart pattern, as expected. A push past minor supports in the 37.10-38.56 zone looks likely to expose the 34.38-78 inflection region. Neutralizing near-term selling pressure probably demands a close above the 42.40-43.88 area. 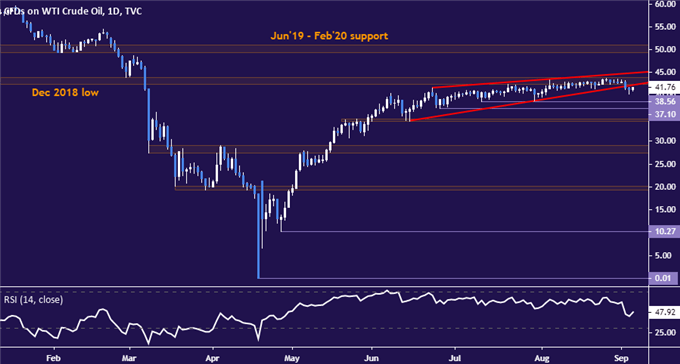 Get Your Free Oil Forecast

Did Ethereum Learn Anything From the $55M DAO Attack?

How Palantir Built A Data-Mining Empire