Ethereum managed to outperform Bitcoin this week with a near 17% gain, compared to BTC’s 8.5%. Bitcoin is still stuck below the key $10,000 level, while ETH moved to levels near $240, but the lack of heavy selling in BTC gives hope that another leg up is possible. That hope may rest in global markets as the recent press higher in stock markets could run out of steam and lead to cross-market selling.

ETH is seeing support as developers close in on the 2.0 version launch, which will mark a key shift from the proof-of-work model to proof-of-stake. In a PoS model, mining is not required to create blocks and verify transactions. ETH 2.0 had been scheduled for July 2020, but there is no specific date for the move. 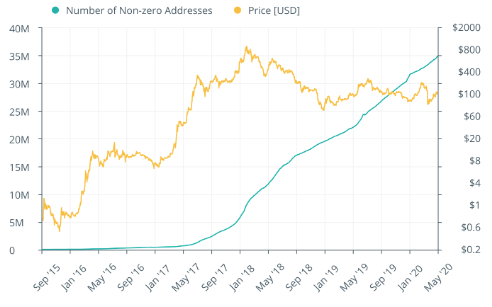 Recent data from Glassnode has shown a steady rise in ETH addresses from 2017 with the figure now over 40 million. Investors will be looking to acquire enough ETH to be eligible for staking and rewards, which requires 32 ETH. Staking 32 ETH will result in rewards of 4.6-10.3%. At current levels, the reward is significant with up to $6,500 earned from staking.

It was recently noted that the Grayscale Ethereum Trust had grown its holdings from $11.7m to $276.5m despite a fluctuating ETH price, so there is clear support building for the coin.

The price of Ethereum has risen to $236 and the next target for the coin would be the $280 level. This will depend on the price action of BTC this week, with the coin stuck below the key $10,000 level and missing the buyers of the halving buzz.

Cardano was 50% higher on the week to cap a good month for ADA as the coin also targets a key development upgrade. The smart contracts platform is expected to upgrade to their new Shelley mainnet sometime this year. Cardano saw the Genesis block for Shelley mined in late-April and the upgrade will be rolled out in phases to avoid hitches.

Another interesting development by the IOHK lab is the crypto microchip. If the project is successful then there could bring exciting new opportunities for the industry. The project will also be open source and not exclusive to Cardano. An embedded microchip could have multiple use cases such as authentication of luxury goods or to create a similar experience to cash with digital coins.

The coin is now trading at number 11 in the list of coins by market cap with a value of $2.02 billion. Tezos currently stands in its way at number 10, but is only $60 million more in market cap. Litecoin holds number 7 spot and is less than $3bn so there is room for ADA to move higher if it can continue its recent run. ADA has moved above resistance at $0.08 and is now looking at the $0.10 level.

The Aelf project has seen its ELF coin double from the mid-March lows and has tested the $0.1 level. The project is active in decentralized cloud computing via the blockchain. The startup was supported by some big backers such as Galaxy Digital and Huobi Digital.

Aelf Enterprise is listed on Google Cloud and has also seen support from Amazon, which is heavily into the cloud with its AWS platform. The project described the Google tie-up saying:

Developers can deploy their own applications on aelf enterprise utilizing Google’s Compute Engine with only a few commands. This allows enterprises to have a working blockchain entirely for their own needs within minutes.

Crypto exchange Coinbase is acquiring the digital asset platform Tagomi to target deep-pocketed crypto investors. The New York-based company caters to traders who invest $250,000 to 2 million per transaction. The company doesn’t have its own exchange, but routes orders to the best prices at one of the many exchanges available.

In October 2019 the startup was supporting $17 million of trades a week and the new team will help to accelerate the growth of Coinbase Prime, which is aimed at institutional investors.

Goldman Sachs rattled some cages after delivering an investor presentation that said BTC was, “not an asset class” and was, “not a suitable investment for our clients.”

The market shrugged off the comments and many prominent cryptocurrency names shot back at the Wall Street bank, but it’s really a sign that investment banks see the threat of cryptocurrency to their business models. A company like Goldman makes fees from securities trading and needs…

These international destinations are open to US tourists

Can Colleges Continue To Thrive Without International Students?