CoinGeek Live 2020 comes to a close after three days of world-class insight into Bitcoin SV, digital assets generally and their capacity to change the world. On Friday afternoon, the conference picked up where it left off, continuing its tour around the world of Bitcoin SV.

Next up was gaming of a different kind: gambling. As an industry dominated by long-tenured incumbents, it is no stranger to adaptation. It navigated the transition to the World Wide Web and online casinos, and now stands at another crossroads. Panellists from the industry joined Jimmy Nguyen for back-to-back panel discussion about how blockchain technology can improve the gaming experience as well as a wider discussion about a cashless future. The panel talked about how blockchain technology, and the transparency can be leveraged not just for the benefit of the players, but for regulators as well. They also considered COVID-19, and the potential for this pandemic to accelerate the arrival of a cashless future.

Highlights of the rest of the afternoon included a discussion on intellectual property, with practical insights from attorneys on how innovators should approach patent decisions and how to pick the best legal advice for their needs. There were talks on compliance, a timely and no doubt appreciated topic considering the recent press around illicit asset exchanges.

There were also more unique interludes.

It was great to watch the winner of the Bitcoin Association 3rd Bitcoin SV Hackathon be announced, having been treated to presentations from all the finalists the previous day. In presenting the winner, Jimmy Nguyen said that it was an especially close contest—but ultimately, online identity solution Repzip took home first place—and $50,000.

We also were treated to a virtual visit to the Bitcoin Association offices in Zug, Switzerland, where a conference viewing party including billionaire entrepreneur Calvin Ayre, founder of Ayre Group and CoinGeek, and Bitcoin Association’s Europe and Operations Manager Patrick Prinz was well underway. It was a short drop-in, but as well as hearing Ayre’s take on the event, it drove home the idea that the Bitcoin SV community is as connected as it is global.

The day ended with a chat between Dr. Craig Wright and renowned economist George Gilder about saving the internet. Emphasis was on the inevitable future, and blockchain’s place at the junction between a future in which the internet and the economy reaches its potential and one in which it does not. 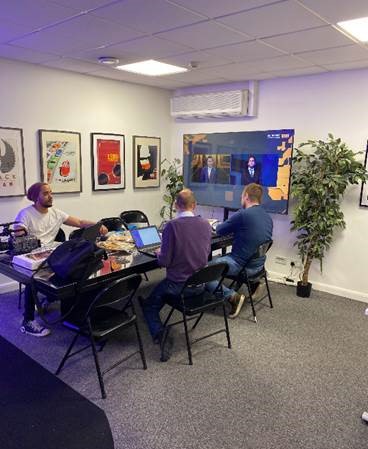 One of the many staging areas at Kennington Studios

In retrospect, the three days of CoinGeek Live were spent building the case for Bitcoin SV: not just the great applications that have been or are being built, but the community itself. The guests over the course of the event were stellar, but the sense of community within Bitcoin SV was great to see. Speakers greeted one another as friends, which allowed the content to speak for itself and allow the theme to come through crystal clear: One World. One Chain.

Big Eyes Coin, Stellar, and Dogecoin are thriving despite the…

Should You Complete The Moise Kean POTM SBC In FIFA 23?

The Market Strategy of Big Eyes Coin to Outperform that of…

Sushiswap Vs. Uniswap: What Are the Differences?

4 Key Takeaways from the FTX Fiasco