NOT PROBLEMATIC:
The downturn on US indices seems to be sentiment-driven and rotational, and caused by investors cashing in their profits, a top strategist said

US stocks fell on Friday as technology shares sold off for a third day in a row, while all three major indices posted a third straight week of declines.

It was the NASDAQ Composite’s first such weekly streak since August last year, and S&P 500 and the Dow Jones Industrial Average’s first since early October last year.

Apple Inc, Microsoft Corp, Amazon.com Inc and Alphabet Inc, which helped to fuel the market’s rally off the March lows, were among the biggest drags on the S&P 500 and NASDAQ on Friday, while the S&P 500 technology index fell 1.7 percent, the biggest weight among the S&P 500 sectors. Apple was down 3.2 percent. 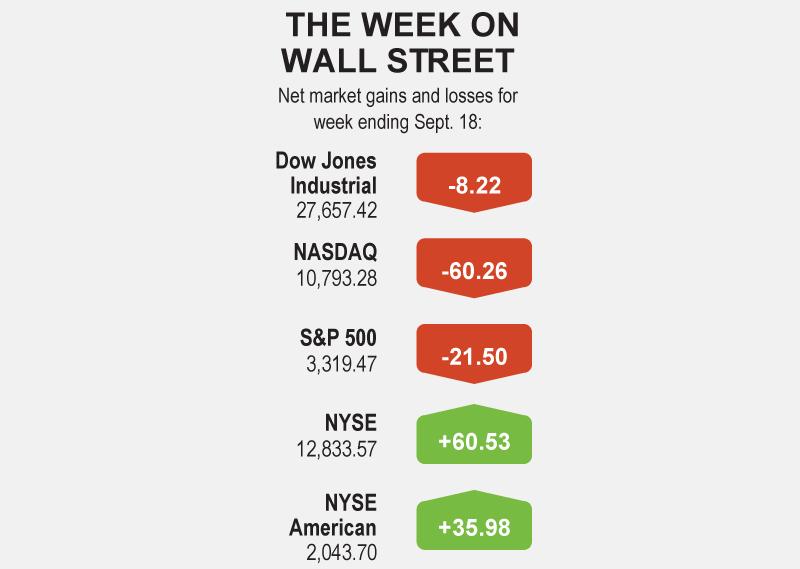 “We had a market peak on Sept. 2, and then we had a rapid decline and a lot of that came in technology and growth stocks that had done so well,” said Tom Martin, senior portfolio manager at Globalt Investments in Atlanta, Georgia.

However, even though the market has had a selloff in technology and growth, “it doesn’t mean the [valuation] extremes are fully worked off,” he said.

Volume on US exchanges was 14.31 billion shares, the highest since this year’s reconstitution by FTSE Russell of its indices in June.

The Dow ended just barely lower on the week, while the S&P 500 fell 0.7 percent and the NASDAQ dropped 0.6 percent.

Investors appeared to be continuing a rotation out of high-flying tech-related stocks and into other sectors, strategists said.

“It looks to be sentiment-driven and, to some extent, it appears to be rotational to us,” said Rob Haworth, senior investment strategist at US Bank Wealth Management in Seattle.

“We’re not sure this really indicates there’s a problem with economic growth, but rather, it’s some profit-taking, some adjustment and rotation” between sectors, he said. “You’re moving from the biggest weights in the market to the smallest weights.”

The S&P 500 materials is the best-performing sector so far this month, while S&P 500 technology is the worst.

European countries from Denmark to Greece on Friday announced new restrictions to curb surging COVID-19 infections in some of their largest cities, while the UK was reported to be considering a new national lockdown.

Tesla Inc rose 4.4 percent as two analysts raised their price targets on the electric-vehicle maker’s shares ahead of its highly anticipated “Battery Day” event next week.

Declining issues outnumbered advancing ones on the New York Stock Exchange by a 2.02-to-1 ratio; on NASDAQ, a 1.12-to-1 ratio favored decliners.

Comments will be moderated. Keep comments relevant to the article. Remarks containing abusive and obscene language, personal attacks of any kind or promotion will be removed and the user banned. Final decision will be at the discretion of the Taipei Times.

11 Dumb Money Mistakes That Are Holding You Back

How Nifty50, Sensex, and Nifty Bank have performed on Budget day…

Benchmark indices close marginally higher ahead of the Budget,…

Budget 2023: Use this F&O strategy to hedge downside move in…

Major US indices delivered another strong showing overnight, with…

Live news updates from January 25: US and Germany to send tanks…

Are we still in the throes of a global supply chain crisis?

Still Not Out of the Woods