The Saxo Bank Group has published the overall monthly trading volumes for August, showing a month-on-month decrease by 9 percent.

Similar to most of the major brokers, Saxo’s volume peaked in March with $496.8 billion overall, while FX stood at $248.6 billion. However, since then, the numbers continued to drop drastically, and August being the worst month in 2020, in terms of volumes, only behind January.

According to the reported numbers, the bank’s daily FX volumes slumped to $5.9 billion last month, compared to $6.3 billion in July.

The month-on-month downtrend can also be seen for the equities market as well with $83.7 billion in monthly volumes declining from $115.4 billion in the previous month.

How to Limit Booking Cancellations During Covid-19Go to article >>

However, the monthly volumes increased in the commodities market, as well as for fixed incomes. Though commodities trading contributes significantly to the total volume, Saxo’s fixed income market is still minor. 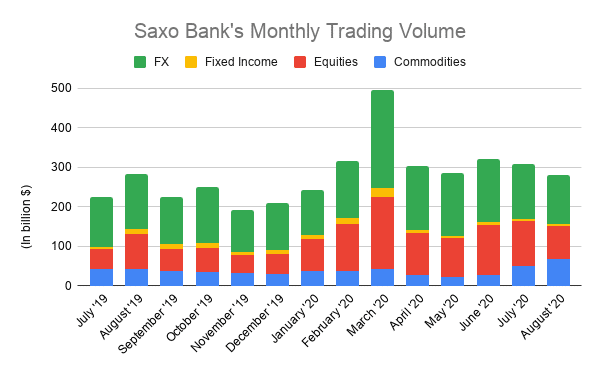 A solid first half

As Finance Magnates reported, Saxo also published its detailed financials for the first half of 2020, showing a net profit of $84.39 million, pivoting from a net loss of $22.08 million in the first half of last year. The multiasset broker cited the increased demand due to the market volatility induced by COVID-19 and also revealed an addition of over 80,000 new traders on its platform in the period.

In an earlier statement, Saxo Bank CEO Andrew Edwards showed optimism towards the market performance post the impact of COVID-19 on it, however, with the declining volumes, the situation seems to be the opposite.

The Release Project uses advanced technology, cryptocurrencies and blockchain to

What Today's Sell-off Has To Do With Robinhood Traders: CNBC After Hours

Commodities worth over $2.5b traded at IME in a month

Germany to emerge from crisis stronger with new trade, energy…

paul hickin: Intervention in commodities has been the theme of…

Alaska and Washington Senators Call on Administration to Quickly…