After the Bitcoin price rose to almost USD 12,500 on August 17, the price continues to be in a downward trend. However, many experts consider the current price movement to be only a consolidation phase, after Bitcoin has experienced a furious rally until mid-July. At the time of publication, the BTC stood at $11,556 with a slight gain of 1.03% within the last 24 hours.

Analysts, such as Byzantine General have remained bullish on Bitcoin. The analyst shared data from WhaleMap yesterday, showing that Bitcoin has little selling pressure remaining in the market. The analyst stated that there are only a few sellers left that are preventing Bitcoin from a rally.

To add to this…: This chart shows where bitcoins where accumulated at. What do you see? There are very few bag holders left. Meaning, there is little sell pressure left. The only real sell pressure now is people taking profits.

Byzantine General’s analysis was a response to another trader who shared bullish figures for Bitcoin. During 2020, Bitcoin has seen a 200% increase, as it has managed to stay at the current support level of about $11,500. Therefore, Bitcoin is at a crucial point.

Since the fall of BTC price from its all-time high of $20,000, the cryptocurrency has closed a weekly candle at this support level only twice. The first time was in January 2018, before the price fell below $6,000. The second occasion occurred recently in early August after Bitcoin broke through the $10,000 mark.

In that sense, the market’s expectations are bullish. Analyst and trader Josh Rager conducted a survey via his Twitter account trying to measure overall sentiment. The result shows that 56.6% of the 2,438 voters are still bullish and expect Bitcoin to rise above $11,800. This could happen if the cryptocurrency manages to convert the $12,000 resistance to a support level that, according to analyst Credible Crypto, could push the price of Bitcoin to $14,000 before testing new all-time highs.

Are you currently Bullish or Bearish short term on Bitcoin?

Is the Bitcoin price ready for a new rally?

Credible Crypto’s prediction is supported by a recent analysis from Bitcoin investor and Civic CEO Vinny Lingham. According to Lingham, Bitcoin will not stay below $12,000 for long. Via Twitter, Lingham stated the following:

It looks to me that #Bitcoin is poised for another leg up, with an overshoot above $15k, but then a retrace and heavy consolidation around $14k for a few weeks at least. I doubt this sub-$12k price holds for much longer and $10k represents strong support right now. 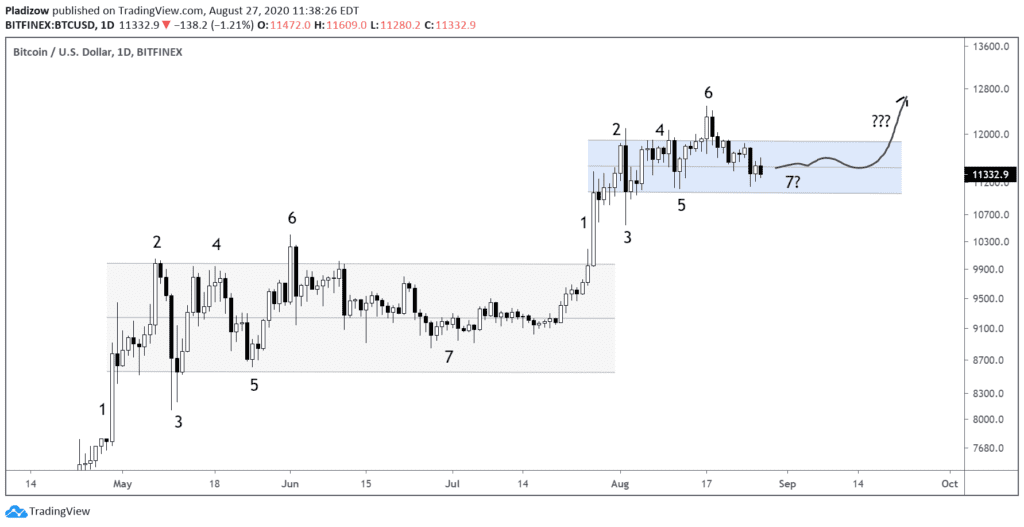 In that regard, Gold Bullion Int co-founder Dan Tapiero recommended investors to be patient. Tapiero believes that Bitcoin is at the beginning of an uptrend that will push the price up to 10 times its current price:

Tremendous long term Log Chart of #Bitcoin projects up 5-10x on this run. Just breaking up NOW. Should last a few years as 2.5yr consolidation is fantastic base for catapult up. Break of old highs will have explosive follow through. Time to sit and be patient.

Why Bitcoin ATMs Are Spreading All Over the World