At the time of writing, Ethereum was trading just beneath a level that could be pivotal for setting an uptrend. Failure to breach this resistance might consign Ethereum to testing lower ranges on the charts for a while. Further, Algorand and Decred were noting very little momentum in the market, with traders watching from the sidelines to gauge their next move. 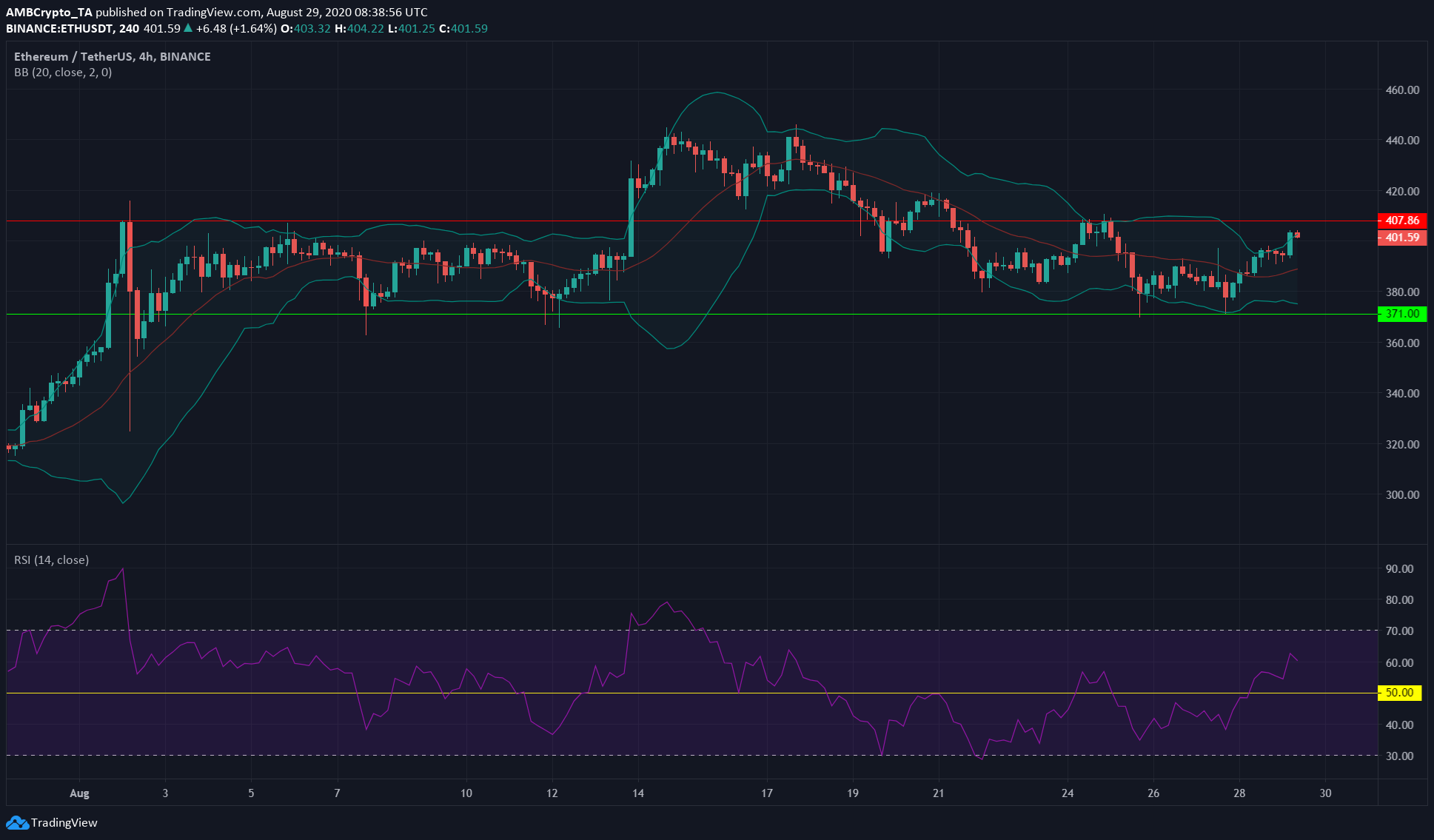 There have been many factors behind Ethereum’s recent growth, with DeFi being just one of them. However, questions regarding its sustainability continue to rear their heads. In fact, the Ethereum Options market also saw a higher number of puts than calls, a sign of bearish sentiment in the market.

The Bollinger bands contracted for a few sessions before expanding on the charts, with the price breaching the moving average to climb to the oversold zone.

Further, the RSI had a value of 62, a figure which suggested bullishness. As long as it does not dip below the neutral line at the 50-mark, ETH could effect a reversal of this downtrend.

If the price does not close above $407, the value of the previous peak, the downtrend would be reinforced and ETH could re-test its support at $371.

ETH’s failure to breach $407 can also point to consolidation over the longer timeframe. 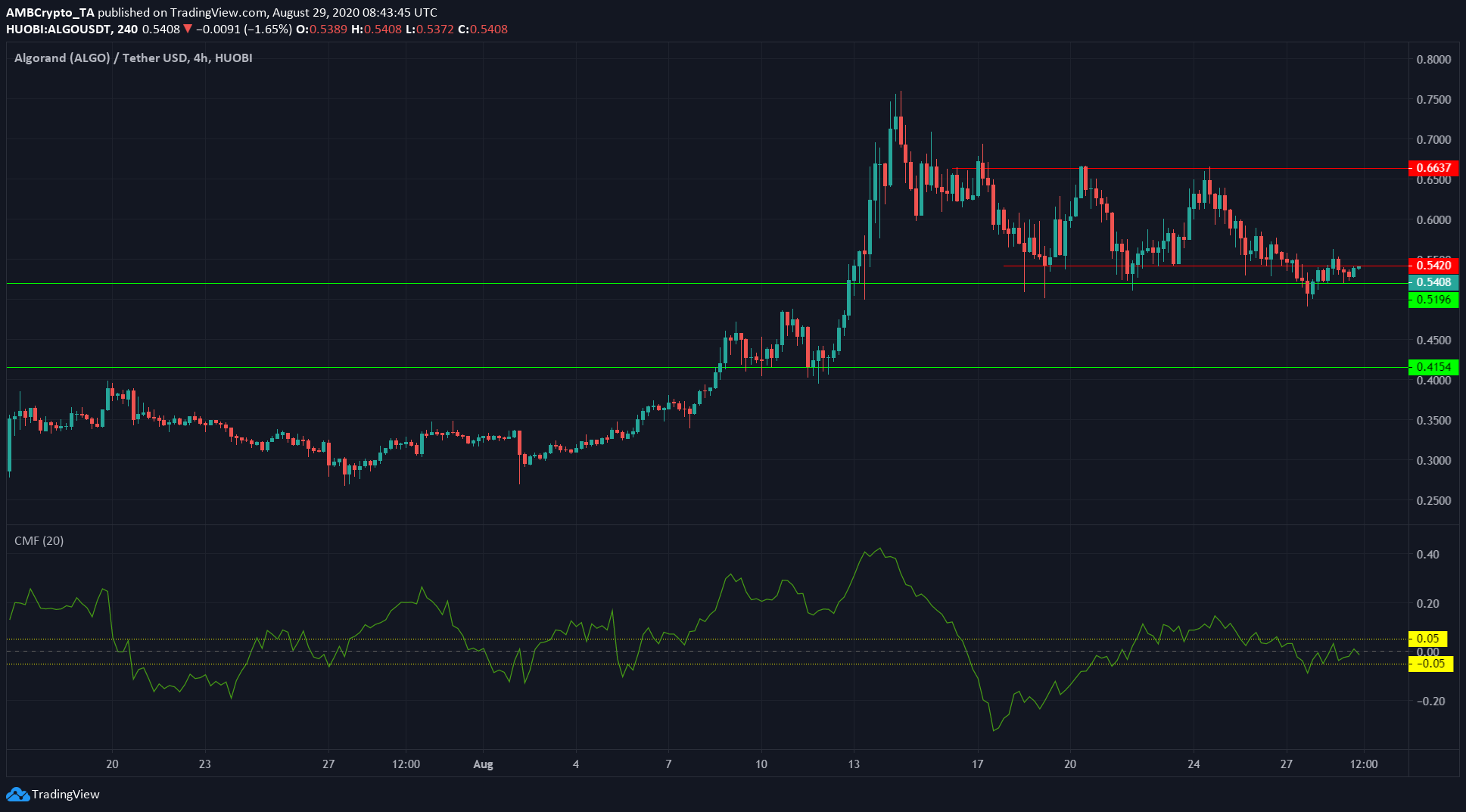 Algorand was in the news recently after it announced a partnership with U.K digital security exchange – Archax.

ALGO faced short-term resistance at $0.54 while enjoying a support level at $0.52, a price level that has been historically significant.

The Chaikin Money Flow showed that the buyers and sellers were evenly matched on the charts, and have been so for almost a week. It could be that the price will consolidate around where it was trading, at the time of writing.

The levels at $0.52 and $0.66 have been touched multiple times recently. Any move outside these levels can be a signal of future momentum. 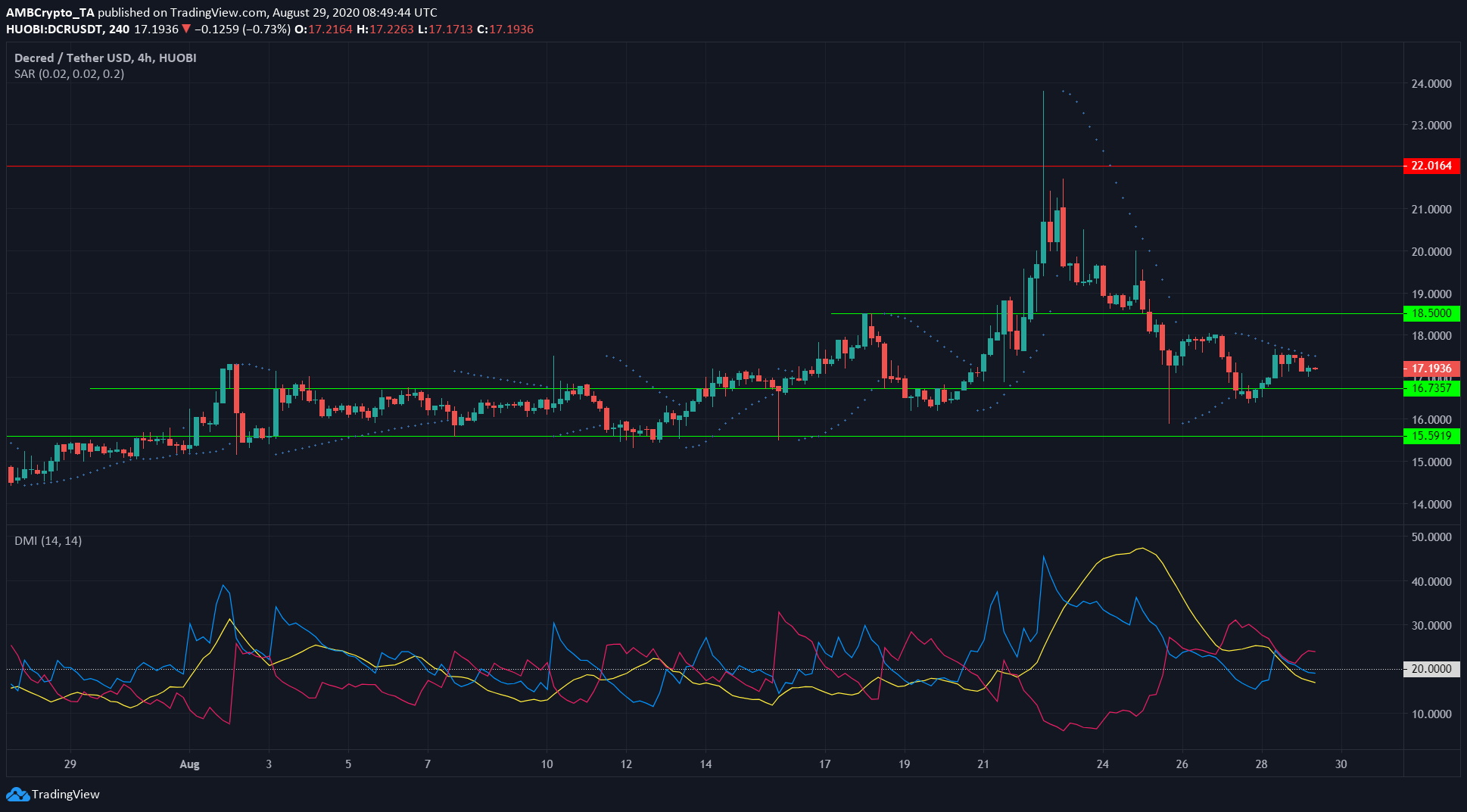 Decred has exhibited decreasing market momentum recently, with DCR surging to $24, before noting a sharp fall. It faced resistance at $18.5 zone, with its nearest support at $16.7.

The Directional Movement Index (DMI) showed that the downtrend of DCR was weakening. APX (yellow) fell below the 20-line many traders use to gauge a strong trend. -DMI (pink) was barely stronger on the chart than the +DMI (blue), indicating that the market could be gathering steam for its next strong move.

Finally, the Parabolic SAR’s dotted markers were very close to the crypto’s price. Sometimes used by traders to set stop-loss orders, their proximity to the candlesticks also pointed to a lack of momentum.